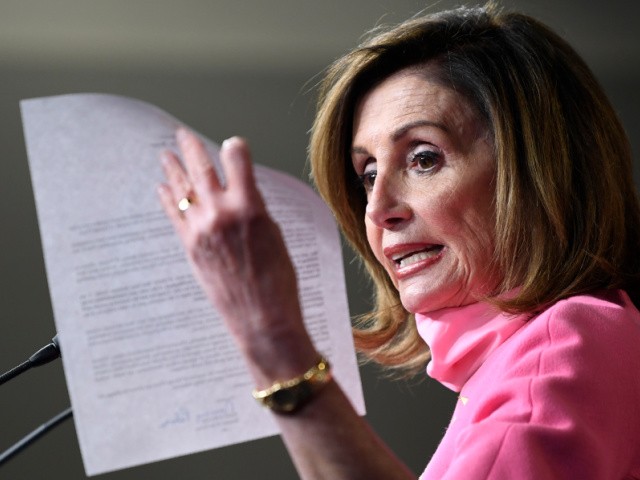 Pelosi, in her letter, claims that the proxy voting capability was being extended due to the “public health emergency” of the Chinese coronavirus pandemic. In doing so, she is extending the “covered period” until October:

In light of the attached notification by the Sergeant-at-Arms, in consultation with the Office of Attending Physician, that a public health emergency is in effect due to a novel coronavirus, I am hereby extending the “covered period” designated on January 4, 2021, pursuant to section 3(s) of House Resolution 8, until October 1, 2021.

Proxy voting has been in place in the House for members to use for over a year. The first proxy voting capabilities went into effect on May 27 of last year, the Hill reported.

The report noted that the proxy voting was only supposed to be in effect for 45 days during the height of the pandemic, so members could cast votes without risking travel.

Since then, Pelosi has continuously extended the capability, which some members have found ways to abuse:

Rep. Charlie Crist (D-FL) used the proxy vote, saying he could not vote in Congress but was able to attend the space launch.
Rep. Thomas Suozzi (D-NY) used proxy voting after admitting he wanted to return home and spend time with family since it would be “would only be suspension vote.”
Rep. Jared Golden (D-ME), in order to save Pelosi’s partisan Capitol security funding bill, switched to proxy voting after saying he would not due to”family responsibilities.”
Rep. Haley Stevens (D-MI), Rep. Elissa Slotkin (D-MI), and Rep. Dan Kildee (D-MI), all members of the Member of Michigan’s Democrat Congressional delegation, claimed they were proxy voting due to the “ongoing public health emergency,” but were able to attend President Joe Biden’s visit to their state.
Rep. Ron Kind (D-WI), Rep. Mark Pocan (D-WI), amd Rep. Gwen Moore (D-WI), all members of the Member of Wisconsin’s Democrat Congressional delegation, were found in a report to be abusing their proxy voting privilege, some using it to take off early on the last day of voting for a possible long weekend.

During a press conference earlier this year, House Minority Leader Kevin McCarthy (R-CA) said that he would end the proxy voting capability when Republicans take back the House in the midterms. He also said that the rules in the House under Pelosi do not make any sense, and he has since affirmed his position on that.