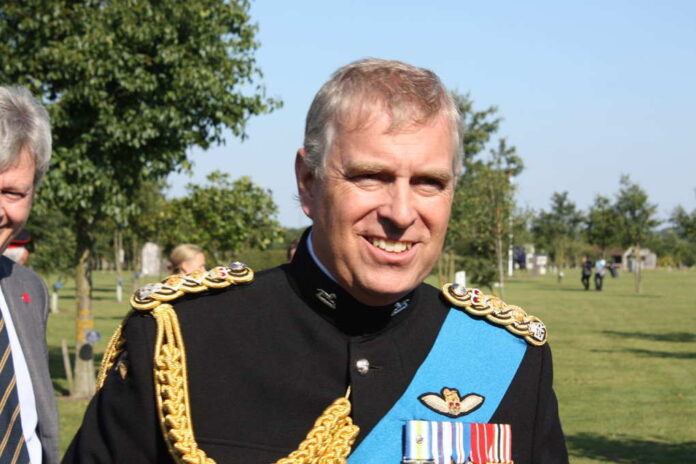 While Jeffrey Epstein’s body rots under six feet of earth his foul legacy lives on through the victims of his perversion. But even if nothing else nice can be said, Epstein wasn’t a greedy man. He had no problem sharing his young female play toys with his friends and associates.

Ghislaine Maxwell, his right-hand woman who coerced his posse of underage girls into “playing nice,” knows who those friends are but has yet to release her little black book of names. Regardless, we already know who a few of the pedophiles are, and one of them is sweating bullets under the spotlight.

It was told by one of Epstein’s victims that Great Britain’s own Prince Andrew was a regular face among the crowd. She said he always appeared to be nervous and that he would sweat profusely. The victims’ name is Virginia Giuffre, and she was just 17 years old when Andrew soaked her with his stenchy perspiration, repeatedly.

Giuffre and her attorneys just slapped the prince with a lawsuit so grab some popcorn. This is gonna be a good one. They filed the suit in the same Manhattan federal court where Epstein, the guy who didn’t kill himself in his jail cell, was taken down. Epstein left this realm in Aug 2019 and now that enough smoke has cleared it’s time to stoke the fire.

Since Epstein’s trial, Giuffre hasn’t backed down from her allegations against him, Maxwell, or the perverted prince. Since Epstein is dead and Maxwell’s already out of the way, she could not be any more serious about exterminating her only remaining predator, Andrew Albert Christian Edward, i.e., Prince Andrew, Duke of York, the third son of Queen Elizabeth II.

Granted, Prince Andrew is off-limits to the U.S. federal court system, but the international brew this is about to stir up already has the prince nearing total dehydration. Some might even call this an international incident in which the U.K. got caught with its royal knickers down. The royal family hasn’t been fairing too well with the press lately anyway so they’re already swarming on this bloody mess like hungry piranhas.

Giuffre stated her objective clearly by saying she is “holding Prince Andrew accountable for what he did to me. The powerful and rich are not exempt from being held responsible for their actions. I hope that other victims will see that it is possible not to live in silence and fear, but to reclaim one’s life by speaking out and demanding justice.”

“I did not come to this decision lightly,” her statement continued. “As a mother and a wife, my family comes first — and I know that this action will subject me to further attacks by Prince Andrew and his surrogates — but I knew if I did not pursue this action, I would be letting them and victims everywhere down.”

When Giuffre’s initial accusation surfaced Prince Andrew adamantly told the BBC “It didn’t happen.” He quickly developed dementia when he claimed to have “no recollection” of who she even was. He said there were “a number of things that are wrong,” and that he could “absolutely categorically tell you it never happened.” No one believed him then, and no one believes him now.

Giuffre said she was Andrew’s girl of choice and that he abused her on multiple occasions. She complied with the demands of Epstein, Maxell, and Andrew under “express or implied threats.” Her statement said she “feared death or physical injury to herself or another and other repercussions for disobeying” due to their “powerful connections, wealth, and authority.”

But this is a new day and Giuffre is out to castrate Andrew’s wanker. She’s being explicit with every detail. One of the abusive episodes happened in Maxwells’ London apartment where she said the trio became violent with her, forcing her to have intercourse with the sadistic child-abusing prince.

Yet another saga unfolded in Epstein’s mansion in New York where Andrew’s sick perverted ways were highlighted. The three culprits forced Giuffre and a second unnamed underage female victim to sit naked on Andrew’s lap as he fondled Guiffre and the other one watched.

She was once again abused by the royal prince on Epstein’s famed pleasure island. She said the prince was well aware of her age when Epstein and Maxell first presented her as a prize for Andrew, but “for the purpose of gratifying his sexual desires,” he told them he didn’t care.

These are but a few of the tales and there are plenty more as yet to be revealed. Perhaps even some other names will surface. We’re staying glued to this as it unfolds so if you happen to miss anything, fear not, we’ll keep ya’ up to snuff as Prince Andrew continues to melt.