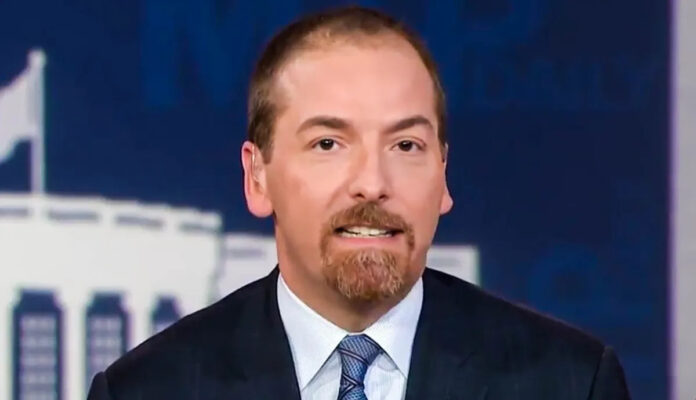 The Fake News is more desperate than ever.

With President Trump gone, their ratings are tanking like a lead zeppelin as their false narratives implode like the Hindenburg.

The Biden Border Crisis, is importing COVID cases into the United States by the hundreds of thousands as illegal immigrants flood over the border scrambling to get the free healthcare, housing, and stimulus checks that Biden has promised. Meanwhile, the Biden federal government is shelling out MILLIONS to put illegal aliens up in hotels, while homeless veterans are left to sleep on the streets.

This is a disaster for the Left and terrible news for their cultural Marxist bosses in the media. Failed news anchor Chuck Todd of NBC is desperately scrambling to patch up the deteriorating left-wing narrative and fabricating controversies to distract the American people and cover for the Biden and the Left.

Is is all evil? Well, mostly. But the fact is that MSM reporters are corrupt individuals who would rather cover partisan combat, in particular conflict that has “no foreseeable way of being resolved.”

Conflict drives rating and makes the hack “journalists” like Chuck Todd feel like they’re in the middle of the action and pivotal to the trajectory of the country. And the fake news will go as far as to invent the action if that’s what it takes to be in the middle of it.

Conflict begets attention begets profits—or just a feeling of being pivotal to the country’s destiny. The press corps will be at the heart of the action even if its members have to invent the action.

A Democrat politician could murder a puppy and the headline from Chuck Todd would be “Republicans Attack Democrat for Alleged Incident That Really Can’t Be Confirmed Because, You Know, Do Puppies Even Really Exist? One Anonymous Scholar Says ‘No.’”

An off-the-record sources says…Republicans are to blame! For everything! Who would’ve guessed?!

While Democrats seek “compromise” and want to “hammer out a bipartisan deal,” Republicans “treat liberals as unworthy of recognition.”

While Democrats “aim to dampen passions,” the Republicans are “bent on inflaming them.”

While Democrats “just want a level playing field and a fair shake for everyone,” Republicans are “trying to rig the game for the Koch brothers and cut down the welfare state.”

(One of the Koch brothers is now dead — may he rest in peace — so the Democrats and the MSM better get the most out of that line while the other is still kicking.)

It’s a pretty easy equation to figure out: Whatever Democrats do is good, and Republicans are to be accused of the exact opposite – regardless of the material facts of a situation.

Which brings us back to Sleepy Eyed Chuck Todd.

The host of “Meet the Press” doesn’t really give a damn about the border crisis. Todd is more concerned about the growing bald spot on the back on his head than the growing flood of illegals across the border and the accompanying humanitarian crisis that Biden is responsible for.

Dead kids or migrants scoring taxpayer-funded hotel rooms? Todd is more concerned about creating conflict and inflaming enough passion in viewers to get people to stop fleeing his sinking show before he’s fired.

This is why on his Sunday show Chuck Todd called the border chaos a “political crisis” facing Joe Biden. Not a “humanitarian crisis” or a “crime spree of flagrant law-breaking,” as it should be characterized.

The Fake News is so fake now that when presented with real crises and real conflict that needs to be solved for the health of our American nation, MSM figures like Todd instead focus on fabricated controversies. They are losing what little shreds of credibility they have left as a result (which for some people is ZERO, so now they are in negative territory).