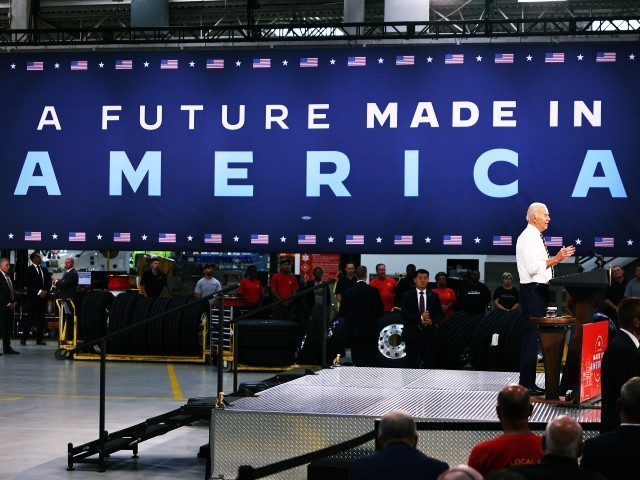 Even as research had shown that U.S. free trade policies had helped gut America’s working and middle class, it was not until the coronavirus crisis that Trump’s warnings had become a reality for the nation.

Peter Navarro, a former adviser to Trump, was tasked with using the Defense Production Act to require U.S. multinational corporations and domestic manufacturers to produce much-needed supplies like pharmaceuticals, ventilators, and masks.

“One of the things that this crisis has taught us … is that we are dangerously over-dependent on a global supply chain for our medicines like penicillin, our medical supplies like masks, and our medical equipment like ventilators,” Navarro said April 2020.

Navarro, and Trump, had been proven right. The U.S. was experiencing shortages of basic supplies like rubber gloves and plastic bottles. Most of all rubber gloves in the U.S. arrive from Malaysia and Thailand. Plastic bottles primarily come from China.

But it was not just basic supplies that were hard to come around.

In April 2020, American hospitals were suffering from shortages of antibiotics, sedatives, and other drugs. Industry insiders have suggested that about 90 percent of the pharmaceutical ingredients for generic drugs imported to the U.S. arrive from factories based overseas. Fifty percent of those factories are in China and India.

Ventilators, in high demand at the start of the pandemic, were tied up because supply chains for the medical devices run through China and India.

Yet and still, American manufacturers said they were being underestimated. Across a myriad of industries, including electronics, machining, medical devices, and metals, manufacturers told Breitbart News they were not being contacted despite being ready and able to help stave off such supply shortages.

Ultimately, many of their capabilities to produce in the U.S. were never utilized.

Coming off such a tumultuous year, a number of American manufacturers figured that when a group of Senate Republicans and Democrats crafted infrastructure legislation, they would look to right the wrongs that decades of economic libertarianism and neoliberalism had created in 2020.

Noticeably missing from the bill: Requirements that American infrastructure projects be made in America.

At first glance, the bill seems to make such a requirement, stating that “none of the funds made available for” each infrastructure project “may be obligated … unless all of the iron, steel, manufactured products, and construction materials used in the project are produced in the United States.”

Further reading, though, reveals the bill’s massive “Buy American” carve-outs that allow the heads of federal agencies to bypass the requirement if they consider the requirement “inconsistent with the public interest,” does not meet “satisfactory quality,” or if they believe buying American will increase costs for the projects.

Chairman and CEO of AVG Advanced Technologies Shalabh Kumar, also the founder of the Republican Hindu Coalition, noticed the loophole. Kumar operates manufacturing plants in Illinois, Iowa, and other states, producing electronics in the U.S.

To try to close the loophole, at least partially, Kumar worked with Sen. Roger Marshall (R-KS) to draft an amendment that would “ensure that materials used in infrastructure projects are made in the United States,” as it states.

The amendment is directly geared towards making sure electronics needed for infrastructure projects are almost entirely sourced and produced in the U.S. Other industries, Kumar said, could have been included in the amendment as well to make sure they were prioritized for projects.

“This could absolutely be expanded on,” Kumar told Breitbart News about the amendment’s potential to include more industries like U.S. steel producers.

The key advisor to then-Republican Presidential candidate Donald Trump, Shalabh Kumar gestures as he speaks during a press conference in New Delhi on October 7, 2016. (Money Sharma/AFP via Getty Images)

Conservatives were sought out to get support for the amendment but Senator after Senator said that while they were for the “Buy American” amendment, they were against the infrastructure bill altogether.

Then, before the amendment could even gain traction, Senate Majority Leader Chuck Schumer (D-NY), Senate Democrats, and 18 Senate Republicans shut down debate over amendments, putting the bill on cruise control for passage without provisions imposing “Buy American” rules.

Now, Reps. Pete Sessions (R-TX) and Rodney Davis (R-IL) are working on garnering support for the amendment which very well could include protections for other industries if unions and domestic manufacturers step up.

“We’re launching a major campaign in the House to correct this,” Kumar said.

From 2000 to 2006, the U.S. electronics industry was decimated as a result of free trade policies and China’s entering the World Trade Organization (WTO).

Prior investigations from the Trump administration found that much of the industry could be reshored to the U.S. within five years with a permanent 25 percent tariff on the nearly $200 billion worth of Chinese electronics imported annually.

Despite the coronavirus crisis exposing the national security risks of free trade, the Senate’s passage of the infrastructure bill suggests little motivation in Washington, DC, to make any significant changes.

But warnings from economic nationalists have not let up.

“We cannot build America’s infrastructure with money borrowed from China and products made in China,” Kumar said.