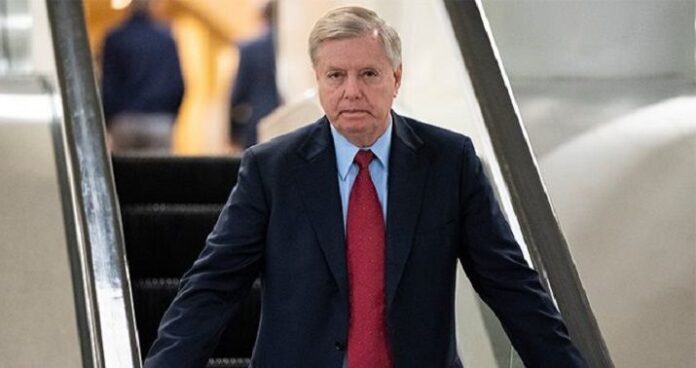 Senator Lindsey Graham paid a visit to the good folks at Fox News Sunday over the weekend and his interview followed a sit down with White House Press Secretary Jen Psaki. Graham took a trip to the southern border recently and was appalled by what he had seen. When he spoke with Fox, he noted that Psaki sounded an awful lot like Baghdad Bob when she spoke at length on the topic.

It’s not like Graham was at all wrong with this statement. That is exactly what she sounds like. Biden and Psaki, among others, are in deep denial as far as this crisis is concerned. The saddest part of all is that they are totally responsible for what is taking place right now.

Biden has a major problem when it comes to speaking about the border situation and it is a simple one to diagnose. He cannot tell the truth to save his life. That’s why he struggles so mightily. The Trump administration, on the other hand, was always transparent. The difference is night and day at the moment.

Sleepy Joe claims that he will not send any unaccompanied minors back across the border and he also claimed that the Trump administration was the only one to ever do so. This is a bald-faced lie and he knows it. He should know, as he was Obama’s vice president during all of his deportations.

Trump even stands accused of allowing small children to starve to death on the Rio Grande banks. He’s laying it on really thick and this is the sort of political theater that the Democrats specialize in. They are not here to help anyone. They are here to advance Democratic agendas and little else.

Biden’s sole goal right now is to portray himself as the ultimate leader, i.e. a better president than Trump. There is no lie that he won’t tell to advance that agenda. It’s like he thinks that we forgot about the good old days when Obama was known as the “Deporter in Chief”.

Biden will send you back over with a smile and a nod, though. Mean old Trump wouldn’t even do that much! We are obviously joking but this is how these people really think. They do not know how ridiculous they look and it’s not like they are trying to find out.

In collaboration with border patrol officials, Graham has now written a bill known as The Secure and Protect Act. This bill is meant to put a stop to the rush at the southern border, providing us with some much-needed peace of mind. Instead of coming to America, migrants can file claims at refugee processing centers in Northern Triangle countries.

This is supposed to keep the border from becoming a major magnet for all sorts of unaccompanied migrant children. The Biden administration has already provided them with all of the go-aheads that they need. They are good to come here whenever they want and Biden does not care how much of a crisis he creates in the process.

The current situation at our southern border is beyond a crisis.

Today I’m introducing the Secure and Protect Act of 2021 to fix broken policies and stop abuse of our asylum laws.

The border will continue to be overrun unless the Biden Administration changes course. pic.twitter.com/JDPMHMzmNZ

OANN has more about the proposed bill: “While the U.S. allows migrants to apply for asylum if they are fleeing their country and seeking protection based on “persecution,” Graham noted the process needs to be reformed because the credible fear standard is too low.

“80 percent of people pass the credible fear standard, but when it comes to final adjudication, the final asylum standard, only 10 percent make it through the adjudicated process,” Graham stated. “So, what the Secure and Protect Act does, it changes the credible fear standard to make it a higher initial screening standard, which means that there will be fewer people having to wait for a final determination.”

It’s clear to see what is happening here. Biden views these migrants as potential future voters for the Democrat party. Add in all of the money that is now available to drug cartels, coyotes and human traffickers and you have a recipe for a major mess. Fix it, Sleepy Joe. Fix it now.