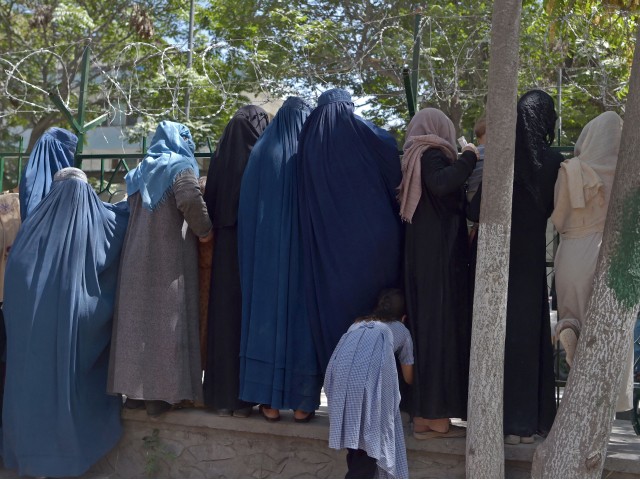 Home Secretary Priti Patel confirmed on Wednesday that the government would introduce a separate refugee policy — the Afghan Citizens’ Resettlement Scheme — that would see 5,000 Afghans arrive in a year, with at least another 15,000 in the following years. It is believed to be modelled on the similar programme for Syrians the Conservative government operated since 2014, which has seen to date 20,319 arrive.

The target is separate from the Afghan relocations and assistance policy (Arap) for interpreters, their staff, and their families to come to the UK. The government has already resettled 3,300 such refugees and predicts that number could hit around 5,000.

Speaking of Britain’s new pledge, Ms Patel told BBC Breakfast that the number could be even higher, saying: “We could end up bringing many more [than 20,000] but first of all we have to have the underpinning and the infrastructure and the support to do that.”

The system will give priority to religious and other minorities, women, and children. The Evening Standard reported on Wednesday that the first British evacuees and Afghan refugees had touched down at the airbase RAF Brize Norton, Oxfordshire, on Tuesday night. Officials aim to take between 1,200 and 1,500 people from Afghanistan — which, after nearly 20 years of Western occupation and support, rapidly fell to the Taliban — every day.

Ms Patel led an emergency meeting with her counterparts in the Five Eyes intelligence community (Australia, Canada, New Zealand, and the United States) to discuss how partners were likewise be airlifting tens of thousands of Afghans to their respective countries, according to The Times. Canada is also accepting 20,000 refugees, though that number includes interpreters who worked for the Western alliance.

Patel has also called on the European Union to do their part, admitting her fear that the number of people leaving Taliban-controlled Afghanistan could result in another massive migrant crisis.

Despite the British government’s offer to rehome a total of at least 25,000 Afghans, British leftists have demanded more be allowed to immigrate, with the Liberal Democrat Foreign Affairs Spokesman Layla Moran MP saying that “20,000 should be the starting point of this scheme, not the target”. The leader of the leftist-separatist Scottish National Party (SNP), Ian Blackford saying the figure should be at least 35,000 to 40,000. While Labour’s Shadow Home Secretary Nick Thomas-Symonds said: “This proposal does not meet the scale of the challenge.”

Responding to similar calls from Labour MP Stephen Kinnock on Tuesday, Ben Harris-Quinney, chairman of the oldest conservative think tank The Bow Group, told Breitbart London that the Labour Party, whose foreign policy under Tony Blair initiated Britain’s long-term involvement in Afghanistan, “should be apologising to the British public, not asking them to bear the brunt of their catastrophes”.