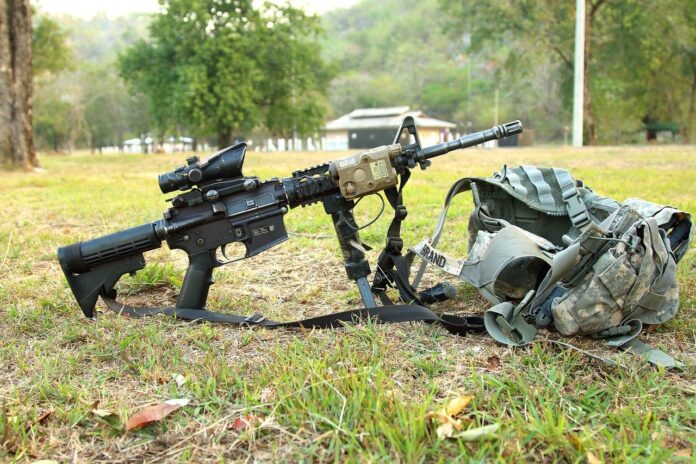 When we talk about firearms, there are many generalized misconceptions – particularly when it comes to what many have labeled as assault-style rifles and machine guns.

This usually results after a tragedy happens where a firearm or specific firearm accessory is used and where those unfamiliar with those items make assumptions about their perceived dangers.

The case of the bump stock, for example.

If you are unfamiliar with this gun accessory, it is essentially a replacement stock for a rifle that works to absorb a lot of the recoil or “kick” a gun gives off while firing, making it smoother and easier to fire the weapon in quick succession.

However, that absorbing of the recoil allows the gun to “bump” forward a bit, resulting in a less accurate shot and what some have come to consider as near “automatic” firing.

Following a shooting in Las Vegas in 2017, where a bump stock was believed to have caused the death of 58 people, it was widely banned.

“Bum stocks are simple pieces of equipment that replace the stock of a rifle and add a small ‘support step’ in front of the trigger. The shooter rests his finger on this step ad pulls forward on the barrel or forward grip to press the trigger against his finger. The recoil of the shot then propels the rifle backwards into a gap in stationary stock where the loose fit gives the rifle freedom to bounce forward. This, along with sustained forward pressure on the rifle, has the effect of ‘bumping’ the trigger back into the shooter’s unmoving finger. So long as a shooter maintains forward pressure, the rifle will continue to fire at a rate much faster than could b accomplished with even the quickest possible series of manual trigger pulls.”

Naturally, such a description convinced many already set against firearms that this small plastic device turned any rifle into a machine gun.

Democratic California Senator and long-held gun opponent Dianne Feinstein even went so far as to claim that “(t)his replacement shoulder stock turns a semi-automatic rifle into a weapon that can fire at a rate of 400 to 800 rounds per minute.”

The increased scrutiny of the device, as well as the recent destruction supposed caused by it, led even the Trump administration to convince the Bureau of Alcohol, Tobacco, Firearms, and Explosives (ATF) to reclassify it as a “machine gun” and, therefore, to be included the ban under the National Firearms Act of 1934 and the Gun Control Act of 1968.

However, that decision has recently been overturned – thanks to a federal court ruling given on Thursday.

According to the U.S. Court of Appeals for the 6th Circuit, the justification used to ban the bump stock initially “does not apply to the judicial interpretation of statutes that criminalize conduct, i.e., that impose criminal penalties.”

The government’s defense of the ban was based on Chevron U.S.A. v. Natural Resources Defense Council’s case in 1984, which established a precedent known as “Chevron deference.” The basic idea is that particular agencies or businesses with a specific skill set or area of expertise can be called upon by the courts to give their “reasonable interpretations of ambiguous statutes.”

The new ruling has decided that “(i)t is not the role of the executive – particularly the unelected administrative state (ATF) – to dictate to the public what is right and what is wrong. That judgment is reserved to the people through their duly elected representatives in Congress.”

So what does this do for the bump stock exactly? Well, it’s unclear at this point.

As the court says, ATF, nor any other agency, cannot decide if bump stock will return to legality in most of the US. And, as the Associated Press pointed out, the case already had a chance before the Supreme Court last year, but because it wasn’t completely developed yet, the high court refused to even look at it.

Only time will tell what will happen with bump stocks in the future, but at least our checks and balances are working as they should along the process.