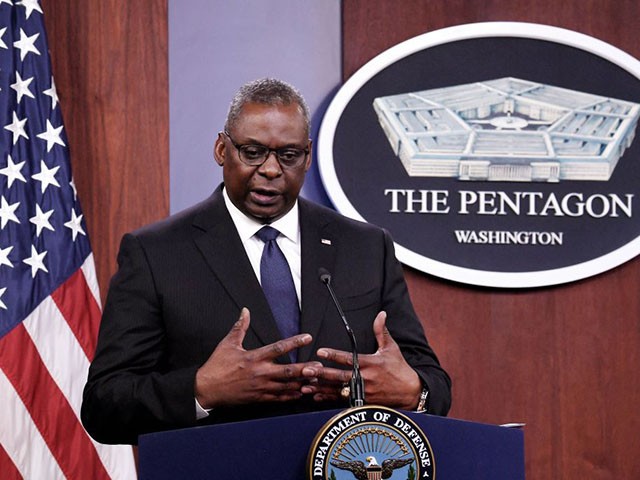 Austin has come under fire for his admission this week that the United States military does not have the capability to help the thousands of Americans stranded outside the Kabul, Afghanistan, airport.

Austin said, “We don’t have the capability to go out and collect up large numbers of people.”

Austin’s involvement in the botched withdrawal from Afghanistan follows as Rep. Jim Banks (R-IN), the chairman of the Republican Study Committee (RSC), urged Republicans in January to vote against Austin’s waiver to allow him to serve as the defense secretary.

The RSC in a January memo said Austin “is not the right person for the job of Secretary of Defense,” noting he “has a track record of failures of the [Central Command] head in Syria and Iraq and in the war on ISIS.”

Austin received confirmation to become secretary of defense after receiving a waiver from Congress. Typically, active duty personnel have to wait seven years after retiring from service to become the defense secretary.

The RSC Steering Committee said in a statement in January that Congress could learn from the lessons based on nominating the two generals:

General Lloyd Austin has not been out of uniform for the requisite seven years and thus requires a waiver from the U.S. House of Representatives to serve as secretary of defense. Based on the lessons learned after the House made the unprecedented move of granting a waiver four years ago, the Republican Study Committee will oppose granting General Austin a waiver.

The RSC memo said Mattis’ and Marshall’s nominations were meant to be “exceptional, once in a generation situations,” which both led to complications in America’s national security strategy. The memo read:

Marshall’s refusal to confront General Douglas MacArthur, the top General responsible for the Korean War, and a friend and military colleague of Marshall, led to a full- fledged civilian-military crisis between President Truman and General MacArthur, which culminated in Truman firing MacArthur. Mattis insulated himself in a coterie of military advisers,9 often pushing away civilian leadership, and in many cases was out of tune with the policy vision of the elected Commander in Chief, creating tensions. For example, the Pentagon under Mattis carried on many Obama-era ISIS policies, including deprioritizing the countering of Iranian militias in Iraq, and opposing the designation of the Iranian Islamic Revolutionary Guard Corps and many of its backed militias as terrorist organizations.

The RSC memo also noted that Austin’s lack of experience in “great power competition and civilian policy debates,” failure on curtailing the rise of ISIS, and failure in Syria would not make for a reasonable exemption compared to the exemptions made for Mattis and Marshall.

The Pentagon also recently focused many of its efforts on Critical Race Theory, which includes Army Gen. Mark Milley, chairman of the Joint Chiefs of Staff, wanting to understand “white rage.”

However, despite the RSC’s concerns about granting Austin a waiver to serve as the defense secretary, Republicans in Congress granted him the waiver.

The Hill noted that if Republicans stood together and opposed Austin’s waiver, they could have peeled off vulnerable Democrats, potentially imperiling Austin’s confirmation.

The Republican Study Committee’s position is not binding on its members, and Republican opposition alone would not sink Austin’s waiver in the House.

But with Democrats holding a slim majority in the House, Republicans opposing Austin en mass would leave little room for error in uniting Democrats around the pick.

Instead, 121 Republicans voted in favor of the waiver.

The RSC memo reiterated that Austin lacked the experience to become the defense secretary. The memo said:

General Austin is not the right person for the job of Secretary of Defense. He lacks civilian experience, has no experience in countering China, and has a track record of failures as the CENTCOM head in Syria and Iraq and in the war on ISIS. For all of these reasons, conservatives should not vote to grant a “waiver” for General Austin.

Banks told radio host Hugh Hewitt Thursday that he does not know if Austin or Milley have the leadership to resolve the Afghanistan withdrawal debacle. He said, “We don’t know what Gen. Milley, what Secretary Austin, what the commander in chief, what are their plans to lead forward? And that’s what’s most shocking to me in this moment.”