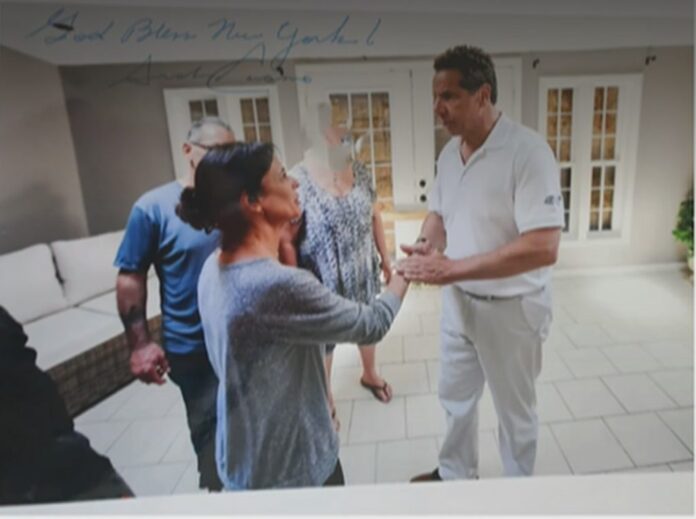 Sherry Vill is now making headlines as she is being identified as the latest accuser of Andrew Cuomo and his ever-growing list of female friends, of which he a little too comfortable with. Cuomo stands accused of sexual misconduct with eight women over the course of his tenure. Like Joe Biden, he just cannot keep his hands and nose off of the women.

Cuomo’s fate is sealed as Vill has pictures to back up her testimony. And, of course, having a feminist attorney going after him is not going to help matters much. Vill has three kids and is happily married. But one fateful day, the governor showed up to view flood damages, and it was there that he grabbed her face and kissed her. Not just once, but twice.

Vill is another victim in a long line of abused women connected to Cuomo. His lustful hands have victimized eight women over the course of several years. And no amount of Democratic threats is going to silence that many people from speaking up and doing the right thing.

Vill noted that she was contacted by the governor’s office asking permission to enter the home and inspect the damages from the 2017 flood. Upon arrival, she said Cuomo “looked at me, took my hand, pulled me close to him. He wedged his face between the dog and mine and kissed me on the cheek.” All of this was done in the presence of Vill’s son, who just happened to be filming the evidence, which is now going to be part of the trial.

Cuomo had to force his fat face between a dog and the lady’s head just to get at her face. The governor tried to explain his actions by stating, “That’s what Italian’s do.” As if that makes it alright to violate women. Vill noted that even after he kissed her, she stated that “He turned to me and said, you are beautiful. That made me feel even more uncomfortable.”

Cuomo did not give up on meeting Vill again. He would later personally invite Vill to a special event. Vill’s husband was not invited, and there was not another soul that was supposed to be there. The governor also sent her an autographed copy of a picture of them together. As if to make her feel honored to be in his presence.

Cuomo is using a tactic of misdirection, hoping that his lustful actions can be excused. He wants people to think that what he was doing was harmless and beneficial to the women that he has tried to rape. And for some reason, the media wants to downplay this scandalous man as someone who is a victim of wicked people trying to smear his name.

Vill noted that “I know the difference between an innocent gesture and a sexual one.” And her attorney insists that “We’re not focused on the criminal aspect. In no way are we suggesting that the governor should be prosecuted for what he did to Sherry. Then she’ll make her decision as to what action she will take.”

And that is why Cuomo is acting like he is in front of these accusations. No one wants to press charges formally. Instead of patronizing the man, someone needs to formally press charges to force an investigation into the matters at hand. The governor has tried to assault eight women sexually. And Cuomo even stated that he had done it many others throughout the years.

It all comes down to the threats that the Democratic Party likes to issue against people that stand up for what is right. They are willing to kill people to enlist their silence on matters of importance. People that take a stand against them end up like the Chinese doctors in Wuhan. They are never seen again.