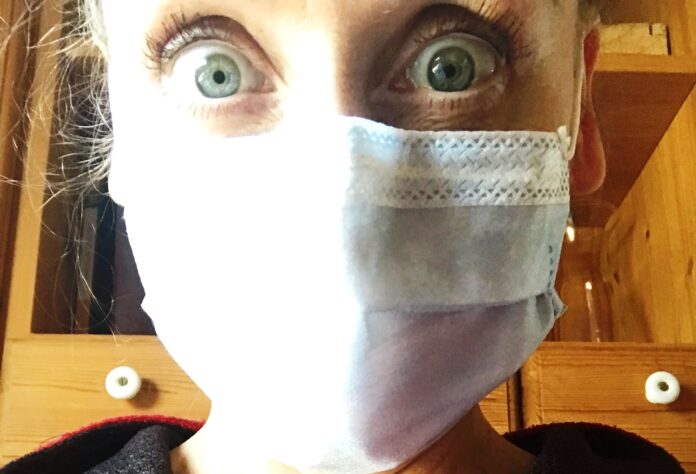 As you well know, the political left on its self-given high horse insists that face masks be worn at all times to combat the spread of the coronavirus and put an end to the pandemic it has caused. And no voice seems louder than that of the very scripted President Joe Biden.

Last week, during his first-ever solo press conference, Biden rambled on as usual about the dangers of COVID-19 and how it should be handled. In particular, he gave a message to all those who have recently stopped wearing masks or those saying that masks aren’t necessary.

Essentially, he urged every “governor, mayor, and local leader to maintain and reinstate the mask mandate, insisting that it wasn’t about “politics” but a “patriotic duty.” The message came after several states have recently decided to drop their mask mandates and reopen their societies and economies for the most part.

However, it seems most governors and such won’t be willing to do as Biden is asking.

Take the governor of Alaska, Mike Dunleavy, for example.

After Biden’s pleading message on Thursday, Dunleavy was sure to tell Biden precisely what he could do with his mandates and why Alaska wouldn’t be playing his games.

He wrote on his Twitter account, “No thanks, @POTUS – you can keep your mask mandate. We’ll keep doing it the #Alaska way: trust the people & let them live their lives.”

Alaska, like most states who no longer, if ever, had a mask mandate imposed, is seeing COVID numbers continue to drop, despite the lack of masks, school closures, and shuttering of businesses. People are going about their lives, moving on, and staying healthy.

Meanwhile, Democratic-led states and cities where masks and closures of all kinds are still very much enforced have seen nearly the exact opposite effect. Yes, thanks to the natural immunities of the disease being built up and the newly released vaccine, numbers of infected do seem to be going down. But not at the rates expected.

Instead, these cities and states have pretty much become the epicenters for the disease, while areas without masks are safe and healthy.

In December, Kentucky Republican and Senator Rand Paul pointed out the ridiculousness of wearing masks, saying that they only seemed to make matters worse. He said, “Every one of the mandates – and you look in country after country, state after state – you look at when the mask mandates went in – the incidents went up exponentially after the mandates.”

And I have to say he’s not wrong.

Study after study has concluded that there is really no scientific evidence that wearing a mask will prevent you from getting COVID or any other disease. Hell, even the CDC can’t seem to make up its mind on whether masks are beneficial or not.

And yet, here Biden stands, stumbling and bumbling around, insisting that every American should be kept under lock and key, mask and shutdown.

Meanwhile, have you seen what he’s letting happen at our southern border?

All along our border with Mexico, towns are being overrun with illegal immigrants from 49 countries, many of whom have never been tested for COVID, let alone apprehended or reprimanded for their unlawful behaviors. They are unmasked, untested, and unvetted to enter our nation and infiltrate our people.

As Republican Senator Ted Cruz of Texas pointed out last weekend after a visit to the border and the Rio Grande, the few migrants that are getting tested have a higher positivity rate that is seven times more than that of the general United States population.

But they are being allowed to come in, nonetheless. Biden’s feds are even busing them in under cover of darkness into US border towns and simply dropping them off to infect the American people.

Tell me how this is allowed, but not wearing a mask on a remote farm in Indiana, isn’t?

And don’t even get me started on all the “protests” that have been allowed this past year while churches stay boarded up and schools remain closed.

Biden is delusional if he thinks America will continue to bow to his mask mandates while his hypocrisy continues to be laid bare for all the world to see.m