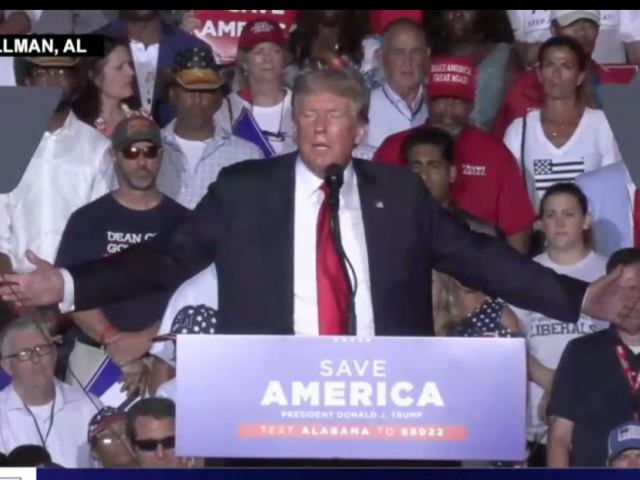 “Biden is the most pathetic president. And look, he makes Jimmy Carter look great,” Trump said.

The former president kicked off his rally criticizing Biden’s disastrous withdrawal from Afghanistan, calling it the “greatest foreign policy humiliation in the history of the United States of America.”

“Joe Biden was going on vacation as Afghanistan was going to hell,” he said. And this is what you get when you have weakness in the White House.”

He also questioned Biden’s level of control over events happening around the world and his control of of his own presidency.

The former president recalled his frequent warnings of what would happen under Biden’s presidency during the 2020 presidential campaign.

“Not only have my predictions come 100 percent true. But it’s even worse than any of us could have imagined in our worst nightmare,” Trump said.

He pointed to growing inflation, high gas prices, a breakdown of border security, as evidence of Biden’s failure.

Migrants mostly form Central America wait in line to cross the border at the Gateway International Bridge into the US from Matamoros, Mexico to Brownsville, Texas, on March 15, 2021. – It’s the new normal for migrant families under President Joe Biden, after the harsh “zero tolerance” approach of Donald Trump dashed the dreams of hundreds of thousands hoping to escape endemic poverty and violence in Central America. Biden’s pledge of a more humane approach though has sparked a new rush to the border, threatening to become a huge political liability. Republicans are accusing him of opening the country’s doors to illegal border-crossers and sparking a “crisis” on the US-Mexico frontier, marked in Texas by the meandering Rio Grande river. (Photo by CHANDAN KHANNA / AFP) (Photo by CHANDAN KHANNA/AFP via Getty Images)

“Not only is Biden an embarrassment to the United States abroad, his radicalism and extremism is currently destroying our nation right here at home,” Trump said.

He recalled all of the things he did as president to strengthen the United States, including on trade, energy, and border security, and he criticized Biden for ending it.