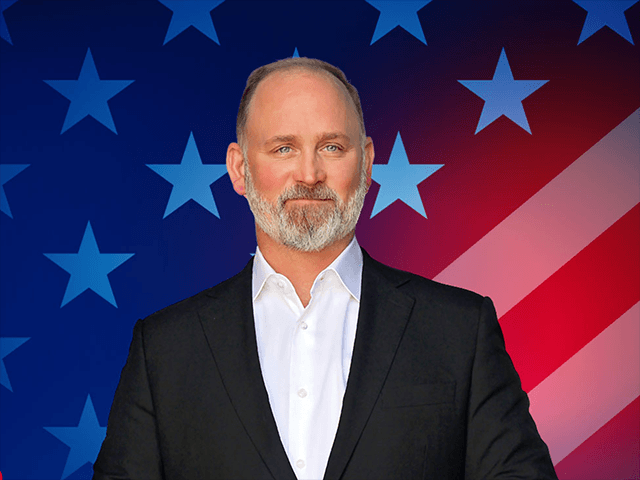 Host Matthew Boyle, Breitbart News’s Washington political editor, first asked Van Orden on Breitbart News Saturday on SiriusXM 125 the Patriot Channel about what is going on in Afghanistan, after President Joe Biden botched a military withdrawal leaving thousands of Americans and Afghan allies in the region stranded with little help.

“It is an unmitigated disaster, and it did not need to happen,” Van Orden said directly about the situation in Afghanistan. “Let’s just be super clear about that. This did not need to happen. And if you think about that last presser that Joe Biden did, what he said that wasn’t inaccurate or misinformed was intentionally disingenuous or a lie.”

Van Orden continued to give examples of Biden being disingenuous and lying. “He was saying that there is no issues, essentially, the Taliban have given American citizens free passage to get to the airports. That was directly contradicted by the Secretary of Defense saying that Americans are being beaten in the street and now they’re saying they stay away from the airfield. So, [Biden] has no concept of what’s going on in the ground,” he said.

He then added, “The other [reason] that really trapped me personally. He’s saying that everything is fine with our NATO allies. He talked to our NATO allies, and they’re fine with the rapidity and the conduct of this withdrawal. I have been speaking to my NATO allies that I fought with in Afghanistan, and they are furious. They’re absolutely furious. They feel that they’ve been abandoned by America, and one of the things they brought up is saying, Joe Biden’s ‘America is back,’ statement should have just said ‘America’s Back,’ because that’s what he’s showing our allies. So about 90 plus percent of what the entire Biden administration is put out about this crisis in Afghanistan is a lie because they created the mess. So Secretary Blinken, Secretary Austin, Chairman of the Joint Chiefs of Staff Milley, and National Security Jake Sullivan, they need to tender their resignations now. They are not value-added because the American people have lost confidence in the National Security Council, and the members of the United States military have lost confidence in the Chairman of the Joint Chiefs of Staff and the Secretary of Defense.”

Boyle also brought up the classified State Department cable all the way from July that had suggested that Secretary of State Antony Blinken was warned how quickly Kabul would fall into the Taliban terrorists’ hands by the August 31 troop withdrawal deadline.

“Well, my thoughts are, is that the Biden administration has continued the type of hubris that the Obama administration started. They think that they can project what they want to happen on to other cultures, and that’s cultural chauvinism,” Van Orden explained. “It just doesn’t work that way. So all of the things that they’re going through, and saying, are completely inaccurate, and you cannot ‘woke’ your way out of a gunfight. So the United States military has been so far off mission, it’s really coming to fruition right now in front of everybody’s eyes and the only reason, let’s not forget this, the only reason that we’re seeing this is because there are thousands of our NATO allies in tens of thousands of Afghans who helped us fight the Taliban that we promised, we promise them, that we would help them out and the Biden administration is in the process of breaking that promise.”

A Taliban fighter mans a machinegun on top of a vehicle as they patrol along a street in Kabul on August 16, 2021. (Wakil Kohsar/AFP via Getty Images)

“What the trash panda media has been covering for the Biden administration, and they’re directly responsible for getting into office right now, they have all turns their back on President Biden right now, and they’re trying to make up for their culpability in him being in office,” he emphasized. “And quite frankly, I appreciate it greatly that CNN and ABC and NBC are now finally telling the truth, but they need to remember that. Now they need to go and tell us about the truth about the border, about critical race theory, about why we have inflation, why people can’t fill up their gas tank and buy groceries on the same day in America. If anything positive comes out of this, I hope that it’s the mainstream corporate legacy media saying, ‘Oh my gosh, we’re responsible for this person being in office, and it’s time for us to do our jobs.'”

Boyle mentioned an “incredible crop” of veterans who are willing to put themselves out there and to run towards the gunfight to represent the district they live in, in Congress. Boyle said it’s incredible. He later added that the answer could be veterans — sending the experienced people to Washington to fix the disaster happening.

“Yes, there are a great pool of veterans running right now, and I think the reason we need to get into office is because we understand that stakes are real. I held one of my friend’s heads when he died in Bagram airfield, listening to his wife over a satellite phone cry into his ear, ’cause she knew she was never going to see her husband alive again,” he described.

“The first uniform service member killed on Afghanistan name was Neil Roberts. And we had our arms over each other’s shoulders for my SEAL graduation photo,” he further explained. “So, we get it. The stakes are real, the time for these focus groups and ruling by fiat and emotion has got the stop in the United States of America. We need to look at things pragmatically and do what’s right for our nation rather than what’s right for us politically, because we don’t care. We care about our country. We care about our families. We care about our communities, and veterans have consistently repeatedly demonstrated that up to the point of risking our lives for our nation, and that’s what D.C. needs we don’t need any more politicians Matt, we need some statesman.”

Van Orden is running for Wisconsin’s third congressional district. The seat currently is held by Rep. Ron Kind (D-WI). However, he announced his retirement — meaning he will not run for reelection — after a slew of scandals were unearthed around him. Van Orden running means the seat could now flip from Democrat to Republican, ever hurting the chances of House Speaker Nancy Pelosi (D-CA) keeping her wafer-thin majority.