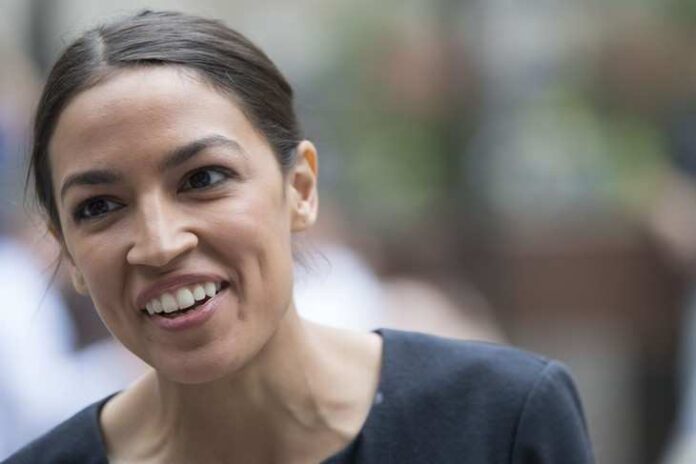 Alexandria Ocasio-Cortez has been relatively silent the past few months. The stress of Washington is starting to show up on her long and saddened-looking face. It is fairly straightforward that she has had to spend some time getting over her favorite president as he was replaced with a mental case named Joe Biden.

Ocasio-Cortez misses the fights that she had with Donald Trump over political issues. The only reason she has come back on the scene is to give more of her demands that she wants out of the old man Biden.

For several years she tried to push her new deal under Trump but got nowhere. But now that there is a pushover sitting in the Oval Office, she thinks she can get what she wants out of him.

The AOC is all about what makes herself feel good. She already shafted her own district by killing an Amazon building deal that would have provided her district with hundreds of jobs. But now she wants to shaft the country by demanding that Joe Stalin Biden increase the amount he wants to tax people to death with.

The Democrats have already indebted the country another $1.9 trillion with their stimulus package. And Nowhere is Biden trying to gut another $2.25 trillion out of the country trying to recover from a pandemic. His insanity is going to be felt at every level.

Biden dictates that he wants to rebuild infrastructure in America. But he is vague as to how that will be done. So far, the only thing that he has rebuilt is the crisis at the border. It stands to reason that part of tax bill money will somehow make its way over to pay for the housing of the illegals that he has allowed into the country.

The White House is expected to unveil a $2.25 trillion infrastructure package.

If the math is done correctly, the Democrats have spent $4 trillion in the first three months of Biden’s terrible reign. As stunning as that may sound, it is nothing compared to what the AOC wants to do to the nation. She has come out of her basement and stated that Biden is not spending enough.

The greedy evil witch stated, “This is not nearly enough. The important context here is that it’s $2.25T spread out over 10 years. For context, the COVID package was $1.9T for this year *alone,* with some provisions lasting 2 years. Needs to be way bigger.”

Ocasio-Cortez takes out her pompoms and rooting Biden to make the most significant financial mistake of his political career. She wants him to screw the nation over so badly that they will have no other option but to install her green deal as the new way of life in America. It will be at that moment that the socialists will dance in victory in their hatred of America.

This is not nearly enough. The important context here is that it’s $2.25T spread out over 10 years.

For context, the COVID package was $1.9T for this year *alone,* with some provisions lasting 2 years.

Needs to be way bigger. https://t.co/eTQ7cxuTzF

Very little of Biden’s new tax deal goes into making what is traditionally thought of as infrastructure any better. Only $115 billion would be used to improve roads and other travel ways. Most of the money that he wants to use would be to move America down the slippery slope of environmentalism. He would use taxpayer money to destroy the natural resource industry and force America down an unreliable renewable energy path.

Biden talks big and provides nothing to explain what he means. His agenda is being made up as he sleeps along in his presidency. Biden is supposed to provide more details about his silly plan sometime soon. But that is only if he can get himself up out of his rocking chair and into his plane to fly to his speech destination.

Damn The Torpedos, Full Speed Ahead Into Marxism!

What is known is that his plan would raise the corporate tax rate by 33 percent. A rate that is higher than China’s rate. Biden has succumbed to the lustful whims of the devious Chinese mindset. He believes that he can take from people what is not his to take. His plan is borderline worse than what the Founding Fathers fought for centuries ago. They fought for freedom and the right to self-govern and not to be taxed into oblivion by a government that did not care about its people.