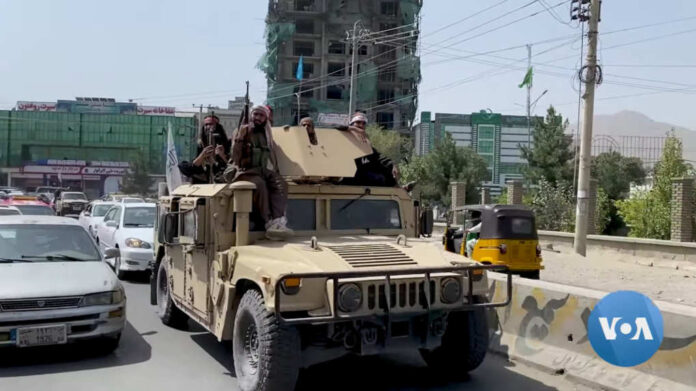 We have to be the most amazing country ever. Or the stupidest.

When Biden decided that it was time to pull out of Afghanistan, we did so in such a way that it left the weapons we gave the Afghanistan army behind to be collected and used by the Taliban. We might as well have put them all in a box with a big red bow around it so that the terrorist organization could decide how they’ll one day use them all against us.

It’s not just weapons that the Taliban has been able to acquire, though. They also have a Blackhawk helicopter and other U.S. military aircraft.

The Biden administration is still standing behind the notion that the Taliban is simply going to allow our troops to peacefully pull everyone out of the country.

Right. And while they watch the U.S. pull out, they’ll randomly seize the occasional Blackhawk or fighter jet as they wield other U.S. weapons against our troops.

Jake Sullivan, the White House National Security Advisor, said that “obviously, we don’t have a sense that they are going to readily hand it over to us.”

That’s a weak way of saying that our weapons have fallen into the hands of the terrorists and that they’re not doing anything to try to get them back. As for how many weapons the Taliban fighters have, it’s impossible to say.

What can be said is that there have been plenty of photos and videos shared that show the Taliban fighters holding U.S.-made M24 sniper weapons and M18 and M4 assault rifles.

The Taliban has to be loving this. They’re able to do whatever they want at this point because the agreement made with the Trump administration to get everyone out by May 1 was missed. Biden was naïve enough to think that he could renegotiate with the terrorists. He severely miscalculated. And as a result, the Taliban have all the power they need – and thanks to the ignorant generosity of the U.S., all of the weapons.

For years, we’ve been helping the Afghanistan military get the weapons and supplies they need to defend themselves. And, one by one, the provinces have fallen to Taliban control. It means that dozens of aircraft and thousands of weapons are now in the possession of the Taliban fighters.

In Kabul, as they watch U.S. troops load thousands of people into the aircraft, they guard the runways with our own weapons. They’re pointing our own weapons back at us, laughing. Yet Biden still contends that this is the best way that we could have possibly pulled out of Afghanistan.

One U.S. official who chose to remain nameless told Reuters that “everything that hasn’t been destroyed is the Taliban’s now.”

Needless to say, this is a problem. And the federal government is just realizing that it’s a problem, particularly because of the possibility that the technology could also be sold to U.S. enemies including Iran, Russia, and China.

These U.S. enemies have shown that they’re offering a diplomatic relationship to the Taliban. Yes, our enemies are partnering up with the insurgents who just happen to possess a significant amount of U.S. weaponry.

This is embarrassing. The reason that the Taliban was able to take the country so fast is that they used our own weapons against us and against our ally.

Mike Rogers (R-AL) is the House Armed Services Committee Ranking Member. In a statement made to the press, he explained that “The Biden-Harris administration has failed to provide an accounting of U.S. equipment now in the hands of the Taliban.” Those on the committee will be looking to require the Biden administration to provide details of just how much of the U.S. weaponry is estimated to be in the Taliban’s possession.

To say that we’re in trouble is an understatement. Yet Biden still smiles and says that “chaos was inevitable” as if that’s supposed to help us all sleep better at night.