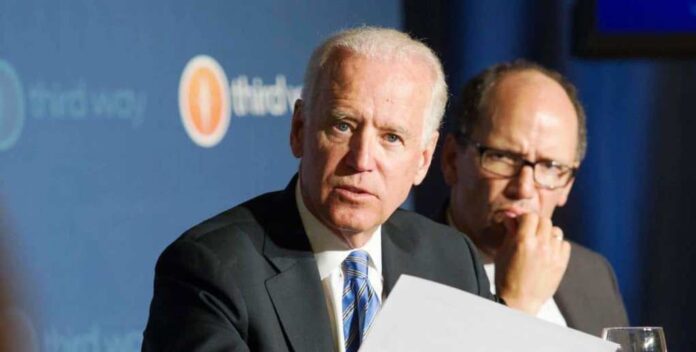 A federal judge told Joe Biden that he had to keep the “Remain in Mexico” program to keep the southern border protected. The illegal people flooding the border are putting lives and property at risk. And all Biden seems to care about is telling kids to come closer so he can sniff their hair and make comments on their looks.

Donald Trump knew exactly what he needed to do to get the border under control. He took steps to ensure that the country would remain safe once he left office. But Biden had other plans and abused his power and ordered the program to stop. He still has never enacted the program again, even after the federal judge ordered it to start again.

After the order, Biden started to weep like a baby because he would have to work. But instead of getting to work, he went and cried to the Supreme Court. He “filed an emergency request with the U.S. Supreme Court, seeking to avoid having to reinstate a Trump-era policy that requires asylum seekers at the southern border to wait in Mexico for their cases to be processed,” a report stated.

Joe Biden does not want to work because he wants to sit in his rocking chair and waste away. Biden never acted when Cuba blew up, and he turned his back on the Afghan people when the Taliban took over. He refuses to act on behalf of the country, so all he does is absolutely nothing.

His deceitful administration asked that the program be left dead. He wants it to shut down until all the details can be worked out into a viable system. Justice Samuel Alito now has a decision to make. He can tell Biden to stop crying, or he can order the program to stop. The future of the program lies in the hands of one man. Should he not want to rule, he can also let the entire court decide.

Biden did not like what the federal judge ruled because he was a Trump-appointed judge. Mathew J. Kacsmaryk ordered the old man to “enforce and implement [Migrant Protection Protocols, commonly referred to as ‘Remain in Mexico’] in good faith until such a time as it has been lawfully rescinded in compliance with the [Administrative Procedure Act] and until such a time as the federal government has sufficient detention capacity to detain all aliens subject to mandatory detention under Section 1255 without releasing any aliens because of a lack of detention resources.”

Biden’s executive orders are being challenged because he does not have the authority to stop immigration programs successfully protecting the country. Eric Schmitt is the Missouri Attorney General and, along with the Texas Attorney General Ken Paxton, filed the lawsuit that would force Biden out of his rocking chair.

The federal judge ordered Biden to work, and he still refuses to do his job and protect Americans. He sides with the illegals and embraces the enemy. That explains why he turned his back on Cubans and Afghan people when they cried for help from the United States. Republicans were ready to move and help the people, but Biden turned away and let the cries fall on deaf ears.

The “Remain in Mexico” program makes illegals stay south of the border until their time in court arrives. It is a method that ensures that they will show up for the court date. Before the program, illegals would fail to show up and would disappear into the country’s heartland. They remain hidden because they know that they will be sent back to their homeland once they lied about asylum.

Biden had until August 21 to get things working again. Biden tried to get another court to side with him in a previous attempt to stop the program, but they refused and ordered the deadline kept in place. His only hope is for the Supreme Court to side with him. This seems highly unlikely given how his work is unconstitutional and ends up hurting American citizens in the very end.