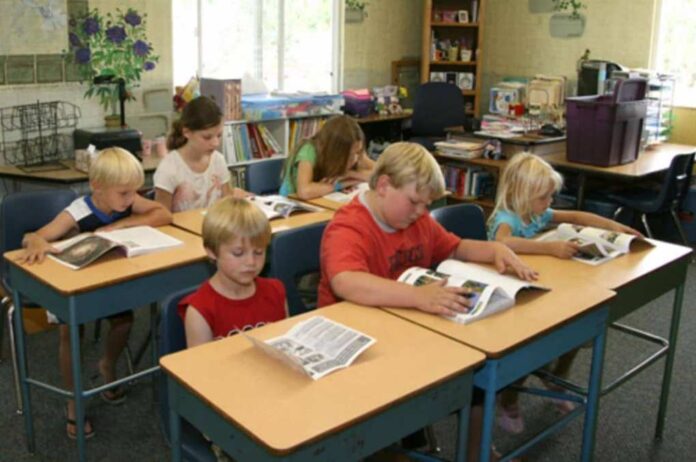 California’s school districts continue to defy all logic and rationale as they refuse to reopen schools and try to rename their schools to remove all traces of lighter-skinned people from their ranks. The events of decades ago are repeating themselves in society today. Except this time around, the lighter-skinned people are being targeted by Democrats and told to take the other bus.

Many schools in San Francisco were set to be renamed based on WOKE guidelines. But as the WOKE movement is losing popularity, the school board is taking a second look at their actions. Democrats and liberals love to please people, so they are willing to do whatever they can to make a few people happy. If it were popular to jump off a cliff, they would be the first in line.

It was reported by local media that “The decision to strip more than 40 schools — including Dianne Feinstein Elementary School and Abraham Lincoln High School — of their names while those campuses remained closed ignited far-reaching controversy and legal challenges. Now, the board is set to reverse course on its extremely contentious decision. On Tuesday afternoon, the board will vote on a resolution at its afternoon meeting that would officially suspend renaming efforts until students are back in school full time.”

Hate groups are pushing this push by the liberals to erase the history of America. They claim that people who hold to traditional history are haters themselves. The main force behind the renaming of American values is the Nation of Islam.

Jeremiah Jeffries is the name behind the push. He is the chairman of the committee tasked with the renaming of the schools. He stated that “There’s nothing mysterious about progression. It’s working instead of wishing.” His parents set the Sister Clara Muhammad School, which caters to the Muslim people. The Nation of Islam is nothing more than an anti-Jewish establishment that wants to put blacks over whites.

But now that the stupidity tank has overflowed in liberal-owned San Francisco, they are willing to take a step back to the right. The insanity of the school board was clearly seen in the remarks made by the board’s vice president. It was reported that “the School Board vice president came under increasing fire this week, after a campaign to have her removed from office revealed social media posts from 2016 in which she made several racist comments against Asian Americans. How much do you love it when left-wing loons get caught with their hypocritical pants down?”

Alison Collins went on to blast conservatives and Republicans by being white supremacists and bigots to the core. Her targeted audience was Asian Americans. She was ticked off that they did not dump Donald Trump and support the woman sniffer Joe Biden.

Another report regarding the closures shows that the city was sued to open quickly. The report noted that kids were killing themselves because they are caged up in their homes. So the parent has come out and sued the city to get on with opening up.

Their push to keep things closed for the sole purpose of redesigning the buildings and learning curriculum is on a pond of thin ice. They have pushed people as far as they are willing to go with the insanity of the day. There is a limit to the number of lies and trash that people are willing to swallow from the Democratic Party.

The children in San Francisco are the ones that are being hurt by the insanity of the adults that cannot get their heads screwed on straight. Adults that have been in positions of power have let themselves lose perspective on how they are to serve the children under their care. They are tasked with the purpose of educating these kids. But they have abandoned that mission and replaced it with self-purposed exaltation.