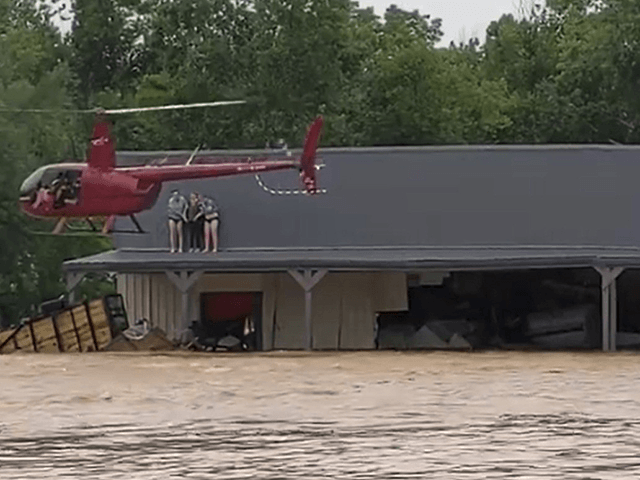 The two were on their way to home to celebrate when Boyers received a call from a woman in Pennsylvania. Her brother’s house in Waverly was underwater and he was stuck on a roof with his daughters and she wanted to know if Boyers could help, the Associated Press (AP) reported.

This undated photo provided by John Pilkington shows helicopter pilot Joel Boyers and his fiancee, Melody Among at John C. Tune airport in Nashville, Tenn. The two helped rescue people from rooftops during a devastating flash flood that killed 20 people in Waverly, Tennessee, on Saturday, Aug. 21, 2021. (John Pilkington via AP)

“I thought, ‘How would I feel if I told her I’m not even going to try?'” he explained. “She just so happened to call the right person, because I’m the only person crazy enough to even try to do that.”

The weather was not good and Boyers had to grapple with hills and high-voltage power lines on his flight to Waverly, about 60 miles west of Nashville.

Prior to reaching the town, he landed in a field to gain his bearings and learned the internet was down which made it impossible to find the home he was searching for, but he took off anyway.

“As soon as I popped over the ridge, it was nothing but tan raging water below me,” he recalled. “There were two houses that were on fire. There were cars in trees. There was tons of debris. Any way debris could get caught, it was. I knew no one was going to be able to swim in that.”

The pilot began flying back and forth over the flooded creek, rescuing anyone he could. Boyers, the co-owner of Helistar Aviation, told the AP he saved approximately 17 people during his mission.

“I literally prayed just days before this that God would give me some meaning in my life, and then I end up getting this call,” he noted, adding his fiance, Melody Among, was his copilot through the ordeal.

Fox 17 shared footage of the devastation and the moment two people were reunited, thanks to the pilot:

Boyers later heard from the woman who initially called him and she said her family was safe, however, he did not know if he rescued them or it was someone else.

“I knew I couldn’t say no without trying, and I couldn’t have lived with myself. All I was thinking about was my daughter on a roof, you know?” he told Fox 17.