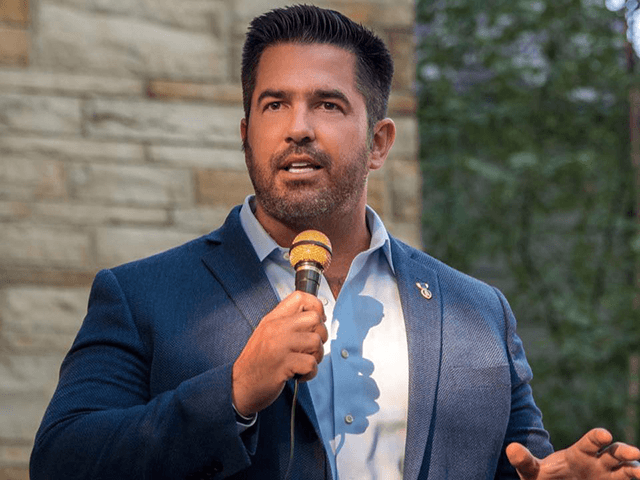 Parnell, who is very familiar with Afghanistan and the Taliban, responded to last week’s events in the region and the effort to get thousands of U.S. citizens, U.S. Aghan allies, and vulnerable Afghans in danger from the jihadist organization evacuated. Thursday’s terrorist attacks resulted in at least 180 killed including 13 U.S. service members and many more wounded.

“Watching an American President bend the knee to the Taliban has been really difficult,” Parnell said. “And when you say it was wholy preventable, it absolutely was. It didn’t have to be this way. We talked a lot, you know how I felt about the war in Afghanistan, been there for 20 years, half of my adult life. I was wounded over there, along with 85 percent of my troops. Right? I believe that it was time to come home, but not like this.”

“So, [President Joe] Biden, in his attempts to be completely different from President [Donald] Trump, discarded President Trump’s plan, which was negotiated from a position of strength,” Parnell added. “President Trump was engaged with regional leaders and talking to battlefield commanders, and a withdrawal was conditions-based, and one of the things that just is unbelievable, Matt, is that Biden moved the withdrawal date for political purposes back to September 11th from May, and when that happened, the Taliban consolidated. Organized a counter-offensive, but not just them, every terrorist faction in that country as well, who is aligned with the Taliban against the West, … that delay, gave them the time and space to reorganize and plan this unbelievable counter-offensive that we saw play out over the last two weeks, and all of this is just laid right there, squarely at Joe Biden’s feet. Anyone could have seen this coming. And it’s just a tragedy that 13 American families now having the worst week of their entire life because of the Biden administration and his utter dereliction of duty.”

Boyle asked Parnell about his time in the region and his experience, bringing up the “Outlaw Platoon” name, mentioning they were given the name due to seeing the heaviest fighting and killing hundreds of terrorists. Parnell said the terrorists in the region are like a “global jihadist all-star team.”

“They are fierce, some of the most fierce warriors that you could possibly imagine,” Parnell added. “The average 18-year-old American private, while they’re well-trained and well-equipped, most of the people that we were fighting over there had 20 years combat experience on Americans… So these fighters are, they really are cream of the crop. They’re not monolithic. Yes, of course, they have their rivalries between these different terrorist factions, but I’ll tell you right now, they are all united in expelling Americans – and the most embarrassing way possible – from Afghanistan, and it’s just been… It’s just been very hard to watch, man, as you can imagine, just 20 years of American blood and treasure in that country thrown away in eight months of the Biden administration, and it’s particularly frustrating given that in the first seven months of the Trump administration, he decimated all of these terrorist groups, Al-Qaeda and ISIS were on the ropes, and now they’re all back with a vengeance and control an entire country woven into the fabric of the government there and are armed with our weapons. It’s just unbelievable.”

Boyle added that American service members are against people willing to commit suicide just to kill Americans, where Americans would never do such a thing, saying the terrorists are a different bread of enemy since they are willing to blow themselves up.

Parnell noted, “When I was in Afghanistan, we’re exposed to all manner of suicide vests, vehicle-borne suicide, IEDS, vehicles filled with explosives to the brim, suicide vests, people wearing 25 pounds suicide vest, when you’re dealing with an enemy that’s willing to kill themselves to kill you… It is an entirely different level, and this is why it bothers me so much that the Biden administration is placing the lives of Americans in the hands of the Taliban. When I watched the CENTCOM commander stand up there at the podium with stars on his shoulder, basically saying, ‘Well, we’ve made it clear to the, to, and what we expect them to do to protect us.'”

“I almost had a heart attack because we, [sic] it’s unbelievable to me that not only are we relying on the Taliban to protect us, who are undoubtedly, 100 percent coordinated with these other terrorist factions on the ground, just so you’re tracking, there is no way a human being sneaks through an outer [perimeter] of any security Taliban or otherwise, wearing a 25-pound suicide best, which is what they used to plan the attack on Americans outside of Abbey gate in Kabul, Taliban let them know, they let them through, they were part of the coordination that attack… I have no doubt about it. And the fact that we are relying on them as we exit that country is just unbelievable to me,” Parnell continued.

Bringing up the Americans being stranded in Afghanistan and along with the U.S. allies. Parnell said that “This is the worst foreign policy disaster in the history of this country.” He also noted that Jen Psaki, the White House press secretary was also unable to commit to getting out every American from the country. Parnell emphasized that the White House just a few days prior said it was “unfair” to say Americans were being stranded.

Parnell went as far as to say that of any president, he has never seen the level of incompetence prior to Biden, either Republican or Democrat. In fact, Parnell said, “it’s bad when every member of the mainstream media is calling it out like it is too, it’s so bad that they can’t even… They can’t even spin it, and so my fear about all this Matt is that this, that we’re witnessing every day for the last week, it’s only just beginning, We’re just in the beginning phase of this.”

At the end of the interview, Boyle asked Parnell what his thoughts on all the failures in the State Department, the White House, and the Defense Department, noting that Parnell has already called for Biden to resign over the loss in the way he handled Afghanistan.

Parnell responded by saying, this is critical and one of the reasons America needs to elect leaders, not politicians, “This was a massive failure. I’ll tell you, Matt, as a leader in the military, and I have commanded troops, combat troops, and then as a company commander, and then I was also a rear detachment commander when I came back from Afghanistan.”