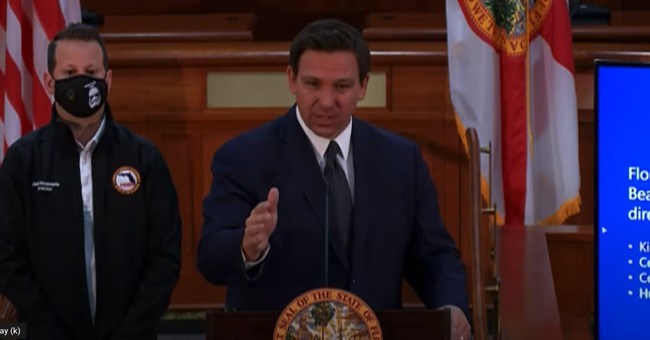 The media just cannot help themselves when it comes to smearing Republicans with false accusations. The latest attack on Ron DeSantis came at the hands of the 60 Minute crew. They have a long history of reporting that was once checked and rechecked for accuracy. But now, they have taken the steps into the realm of unreliability as they have deliberately lied about the vaccine distribution in Florida.

The insidious attacks were so vicious that Ron DeSantis could easily win a court case over defamation. But DeSantis is not concerned with what people that is not true. He is more concerned with telling the truth than what others are trying to pass off as truth.

The way that DeSantis went after the media is similar to the way Donald Trump dealt with them. When 60 Minutes came out and aired a broadcast that was so full of lies that even many Democrats were appalled by the report. Politicians on both sides of the fence railed against the CBS show and came out with facts to prove that they did not do their research.

The tragedy that 60 Minutes did is to twist the testimonies and the facts to build a narrative that would support the story they wanted to use to destroy Ron DeSantis. But when a fake story is told that is blatantly false, not even a Democrat will believe it.

60 Minutes did not like the truth about how the vaccine was handed out to Floridians. DeSantis kept things very organized and did not show favoritism to any one company over another. He used Publix to help distribute the vaccine because they had resources and the locations to get it out quickly. And long before Publix was used, medical facilities were doing the best that they could to facilitate the added burden of healthcare.

All the Cuomo scandals?

60 Minutes looked beyond the compassion and decided to fabricate a lie. Their deliberate attack on DeSantis is nothing short of a terrorist attack on Americans. To accuse someone of acting selfishly when it is not true during a pandemic relief moment is a hit well below the belt.

The Floridian governor is not one to take things laying down. He took to the airways and corrected the nonsense that CBS tried to report as truth. This gave him the chance to nationally show the success that Florida has had with the virus and how they have gotten the vaccine to the people without much effort. And what made it even a more significant victory for him is that state Democrats came to his defense and debunked the CBS report.

Jared Moskowitz was the Democrat that backed up DeSantis with the truth. He stated very clearly that “I told them that this Publix narrative was malarkey, and they still went with it.” The drive to smear a Republican was so strong with CBS that it just drove them mad when no one supported their fake news. So like every good liberal media source, they would publish it knowing there would fallout.

Moskowitz was blown away that supporters of his own party would even try and pass off something that so full of lies as a true story. It was clearly a story that was designed to hurt the one it was written about. And that was a man that has the potential of beating every other Democrat running for the office of the president in 2024.

CBS went on a lying streak and tried to tell the Publix received an exclusive” contract for their part in donating money to the governor’s campaign fund several years ago. CBS is guilty of finding facts and twisting them to fit a narrative designed to slander a political opponent. The news station is not worthy to stand with other stations that would report truthful narratives instead of making up.

The Democrats, minus one Moskowitz, are just raging mad that Ron DeSantis has done a great job of handling the vaccine and allowing his state to live free over the past year. He has defied all odds and stands as an abnormality to the liberal agenda and fear-pushing drive that they like to take people on.