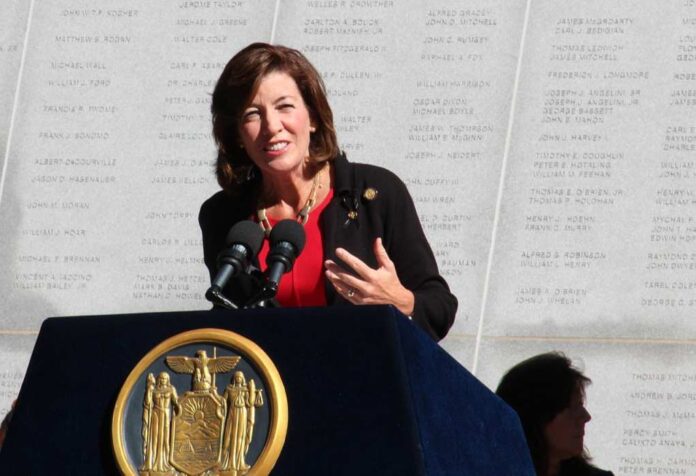 Now, we’re learning that there’s another type of Democrat…

Kathy Hochul, New York’s first female governor, identifies herself as a “Biden Democrat.” In her first sit-down interview since the swearing-in, she explains what that means.

Hochul is clearly under the misinformation that Biden is a true leader. She explains how her grandparents were FDR Democrats and how her parents were JFK Democrats.

Is she talking about the generation or the president themselves? After all, it’s hard to compare Biden to FDR or even JFK. Both of those presidents were impressive in their own rights. Sure, they were Democrats – but they also knew how to lead. They knew how to show the world that the U.S. could be aggressive. They were leaders that we weren’t embarrassed by.

When Hochul calls herself a ‘Biden Democrat,’ she gives Biden a significant amount of power. She compares him to some of the greatest presidents that ever served the Democratic Party. And, she forges about all that Biden has done to embarrass and disgrace our country.

Considering all that has transpired over the past few weeks regarding how Biden handled Afghanistan, most political leaders are trying to distance themselves from the president.

So, Hochul is either showing that she’s extremely loyal…or that she’s an idiot.

Hochul has identified that she plans to use her position to help Democrats maintain and expand their House majority in New York. She also feels that she has a responsibility to lead both the Democratic Party and the government. She wants to do “whatever I can to let people know that the values of the Democratic Party today are part of who I am, fighting for people that just had a tough blow dealt to them in life.”

She says that she’s fighting “for people” instead of for Americans. So, that’s what we can expect out of Hochul while she’s governor. And, she’s currently finishing out Cuomo’s term. She’ll have to campaign to get voted in for a full four-year term if she wants to continue leading everyone toward being a “Biden Democrat.”

Although she’s promoting Biden, she’s not showing that she’s very diverse in her selection of those around her. There’s a female attorney general and a female acting lieutenant governor. Additionally, there are two females serving as her top aides.

Admitting that you’re a “Biden Democrat” in today’s political waters is a dangerous one. She’s not only supporting an invalid but she’s also showing that she’s going against the Democratic Socialists who are found throughout her state, including Alexandria Ocasio-Cortez.

Now that we know who Hochul is, we cannot expect great things to come out of New York until she’s out of office. Hopefully, she’ll keep the seat warm for someone who can do great things without wrecking the state too much in the interim.