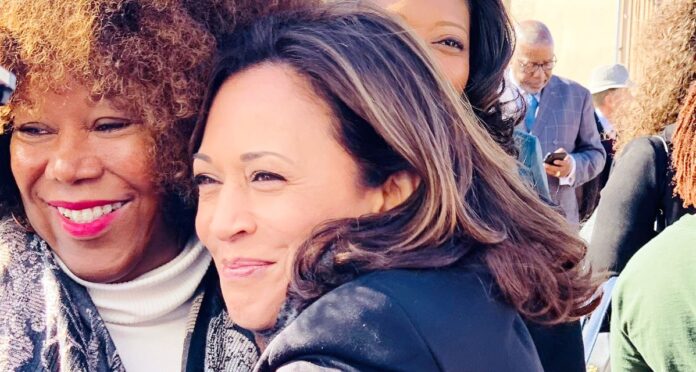 Clearly, the Afghanistan troop removal hasn’t been the Biden administration’s finest hour. In fact, some might say that it’s one of their most devastating incompetencies to date (which is saying something, considering their history). And while things sometimes go awry despite the best-made plans of mice and men, it’s hard to see how the vice president’s handling of the crisis and questions surrounding it were anything be done the most inappropriate.

As Americans scramble to find a way out of a country being left to the will of terrorists, the numbers just aren’t adding up and it’s becoming increasingly clear that the United States government will likely be leaving some of our own behinds if the terrorists’ unbending Aug. 31 deadline is complied with.

However, when questioned about the issue, Vice President Kamala Harris thinks this is a laughing matter, according to a report in the New York Post. The publication reported that the VP was approached by reporters on Friday about the growingly devastating issue in the Middle East as Americans watch countrymen and allies scrambling to escape terrorists:

“Hold on, hold on — slow down, everybody!” she said before cackling about the questions being put to her by the reporters. “I want to talk about two things — first, Afghanistan,” she continued. “We couldn’t have a higher priority right now, and in particular, our priority is making sure that we safely evacuate American citizens, Afghans who worked with us, Afghans at risk, including women and children, and that is one of our highest if not the highest priority right now.”

Now, maybe Harris laughed because she was nervous. Maybe she knows that the Biden admin is admittedly caught red-handed making insane and asinine decisions because they’ve been influenced by heaven knows who. Maybe it’s just her becoming frustratingly aware that her administration is going to go down in history as the most damaging on record. But whatever the cause, this politician is putting on a bad look with her witchy laughter combined with her frigid body language and attitude.

One of the bigger questions surrounding both Biden, Harris, and the entire administration is whether these “quirks,” such as Harris’ bazaar laughter, are making a bad impression on international leaders. Has she had one of these episodes while speaking to someone who has nukes?? It seems that would be a big question that Americans would want to know the answers to.

It’s possible Harris’ laughter hit a nerve because Americans knew that they knew that Harris was a narcissist but they ignored all the signs. Or maybe it’s because voters would have had to run to the polls with their hands over their ears not to know that the Biden administration was going to have a terrible foreign and military policy. But whatever the reason, it seems that any voters with friends, family, or compassion in the Middle East is up a political creek without a paddle.

When asked about the issues facing America in the middle east, specifically the earlier fall of Kabul and the 1975 fall of Saigon a senior Biden administration official said, “We don’t want to get bogged down in the historical comparisons,” according to the New York Post.

Sure, I mean I don’t want to get bogged down in comparisons when I’m clearly making stupid mistakes that anyone who has been through this type of thing before could see was going to go badly. That makes complete sense that historical comparisons wouldn’t bode well for the current administration. So, they laugh, and it reminds voters that they were laughed at in November, and they’ll likely be laughed at again if the elections aren’t secured before we all go to the polls again.