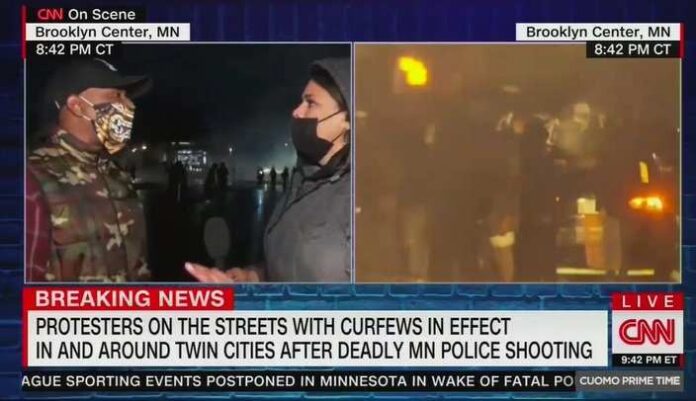 A CNN reporter in Brooklyn Center, Minnesota was at the epicenter of the riots and you won’t be able to believe what was said to them. Sara Sidner is one of their many far-left activists that they employ and she was cussed out in front of the whole world. “As you can see, y’all be twisting up the story and s–t y’all doing,” he said. We could not agree more.

“What I think about this is all the press and all the extra shit y’all do makes this worse,” he continued. Of course, this man does not believe that people need to be outside protesting against the police department. “Yes. When people want to protest they shouldn’t do it in front of a f—ing police station. Yeah. Courthouse. Shit like that. You get what the f— I’m saying,” he says.

The language might be a bit coarse but this man is definitely getting his message across by any means necessary. CNN probably thought that they would stick a mic in someone’s face and get a flowery message from the liberals about the necessity of protests. In fact, the exact opposite happened and we are glad to see it.

The reporter tried her best to indicate that she was on the right side here. She expressed concern that she was about to be struck by a projectile. She also asked the man if he would be willing to exchange phone numbers. The man was concerned about the image that was being projected of the rioters, which is understandable enough.

A protester in #BrooklynCenter curses out CNN’s Sara Sidner live on air, telling her that “all the press and the extra s*it y’all do makes this worse.” pic.twitter.com/FNyrhw9D99

No one wants to leave themselves open to the CNN interpretation of events, that is for sure. They are not helping the situation in the slightest. Mainstream media outlets like CNN do not care about the facts and they are not the least bit worried about offering up an accurate portrayal.

They will say whatever they can to keep you watching. That’s all there is to it. We are simply surprised that this man wasn’t cut off as soon as it became clear that he was not going to be toeing the line that they have drawn in the sand about these things.

We are sure that the world of leftist social media is going to ignore this clip, however. It goes against everything that they believe. They want to buy into the idea that they are entitled to smash up neighborhoods any time that they disagree with the police’s actions. This only causes more strife for the rest of the community.

Everyone is being forced to stay indoors because of their destruction. Are they stopping to think about all of the folks who are adversely affected by not being able to move around freely? No, they are not. They want what they want and they do not care who they hurt in the process….even if the people that they claim to care about the ones who are being affected. It is funny to see how that works, isn’t it?

The man in this clip is at least talking some level of sense. You don’t have to agree with the language that this man used to buy into what he is saying. Unfortunately, there’s no more nuance taking place when it comes to conversations of this nature.

You either support the riots 100 percent or you are referred to as a racist. Those are the terms of engagement now when it comes to the mainstream media. There is a lot of this on social media as well. You are going to get dunked on quickly and severely if you even attempt to speak in a manner that isn’t scripted.

We are not talking about a literal script, of course. We are talking about the liberal script that everyone has to read from now before they are accused of being a racist. If you’re not hitting the marks that CNN and their ilk have decided on for you, you are going to be in big trouble.