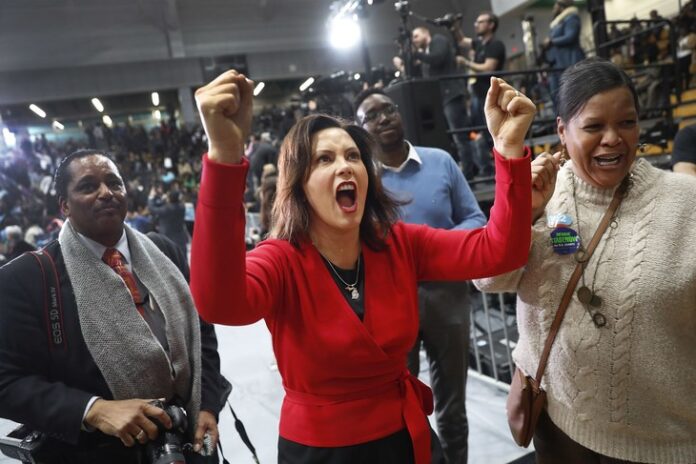 Gretchen Whitmer is America’s favorite governor to hate. During the coronavirus pandemic, she knowingly violated her sphere of authority and mandated horrible lockdown rules for people living in Michigan to live under. The way she socially ordered people around had citizens fuming with anger because she had no right to order people around the way she did.

So many people were angry with her actions that, at one point, several men decided to kidnap her and force her to make changes. Others honked in disgust while others formed rallies and filed lawsuits against the insane terrorist leaders.

Her witchy behavior drew criticism from Republican Ron Weiser, who stated that “Our job now is to soften up those three witches and make sure that we have good candidates to run against them, that they are ready for the burning at the stake.”

And Margaret Brennan from CBS responded that “He was talking about you and two of your female Democratic colleagues. The Senate Majority Leader was also bragging that the Senate had ‘spanked’ you on the budget and appointments.” She was making the case that men were simply sexist.

It is just like a feminist-Nazi to blame men when they are confronted with criminal behavior. Whitmer has stated that “I can tell you this, though, that sadly — in this moment — there have been a lot of death threats. We know that there was a plot to kidnap and kill me, death threats against me and my family.”

She misses the point that it is not just men that are making these statements. There are women that came to the rallies and had honk their horns in disgust at the Nazi ruler. Whitmer is no longer the favored saint; she thinks that she is in Michigan.

The FBI did confirm that some men were going to kidnap the governor, but their plan was stopped before they could put it into action. The reason for their plan is because of what the governor was doing to the people. They may have made the wrong choice to kidnap Whitmer, but her actions prompted them to decide to take such action.

When people are taken to the brink of death and starvation, they will be willing to do whatever is necessary to relieve their pain. But Whitmer thinks that it is not her fault the way she is being treated the way she is.

Bang(s)! Protestors Take a Shot at Gretchen Whitmer as They Storm the Capitol With ‘Operation Haircut’ https://t.co/57Lh41BtaJ

— Holding a funeral for the media

It is just a Democrat to blame their crimes on other people. She says that men are just treating her in a sexist way because she is a woman.

When the kidnapping story came out, the media went crazy and blamed Donald Trump for programming his followers to take care of Whitmer. But when it was discovered that they were liberals and hated Trump, the fake narrative fell apart. People just hate Whitmer that much.

The socialist governor stated that “I don’t have time, though, to focus on that or to go punch for punch. I’m not gonna do that. I’ve got a job to do, and that is helping get my state through this, helping get our economy back on track, supporting the American jobs plan so that that helps us do both of those things. And that’s what I’m gonna stay focused on.”

“There have been a lot of death threats, we know there was a plot to kidnap me and kill me … It is different in what I’m confronting than what some my male counterparts are,” @GovWhitmer says of “misogyny” she’s faced pic.twitter.com/IwNDjgbOID

She may claim that she does not have the time to play her critic’s games, but she certainly has created enough drama of her own by claiming the sexist card. Her troubles have nothing to do with her being a girl. But it does have everything to do with how she has defiantly treated people over the past year.

Not just men hate Whitmer. Women vehemently hate her. She has hurt small business owners and cause a lot of financial harm to people living in Michigan, and they are not going to forget her crimes when it comes to her reelection.