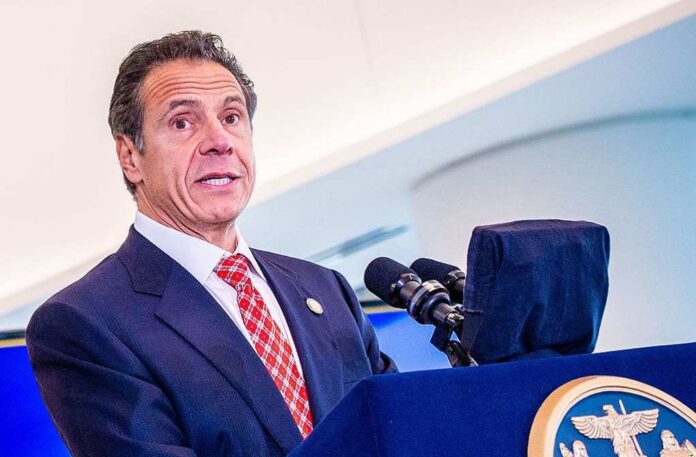 Andrew Cuomo gets to live with a new word in front of his name. He is now the “former” Governor of New York state. The once prized and praised man was awarded an International Emmy Award for how he supposedly saved lives during the pandemic. But all of that came crashing down around him when he was stripped of his beloved award because he lusted for sexual contact.

The blinded Cuomo lovers could not bring themselves to strip him of the award when it was discovered that he killed thousands of people by infecting them with the virus. It took almost a dozen women to come forward and tell their stories of how the wrinkled monster sexually abused them and threatened them if they ever told anyone.

The reluctant group that took away his prize was the International Academy of Television Arts & Sciences. The “former” Governor would see his name erased from all awards, and they would take his name out of their history books. The price for misconduct is high, and Cuomo is paying it with his life one moment at a time.

The Academy noted that “The International Academy announced today that in light of the New York Attorney General’s report, and Andrew Cuomo’s subsequent resignation as Governor, it is rescinding his special 2020 International Emmy® Award. His name and any reference to his receiving the award will be eliminated from International Academy materials going forward.”

Cuomo’s actions are thought of as a thoughtless man. He wrecked lives and killed people. He even tried to cover it up by bury reports and changing the numbers. And when he could stand being alone anymore, he would abuse one of the women that worked for him.

The man should have never been awarded anything at all. He should have been kicked out of office for the way he handled the pandemic. The strict measures made things worse for people in New York. And as Governor, he is supposed to protect people and not murder them.

For some strange reason, Cuomo and Paisner see the governorship as some Hollywood experience, as seen in his statements about Cuomo. Bruce L. Paisner was enthralled with Cuomo because of the way he presented himself. He said, “The Governor’s 111 daily briefings worked so well because he effectively created television shows, with characters, plot lines, and stories of success and failure. People around the world tuned in to find out what was going on, and New York tough became a symbol of the determination to fight back.”

The two acted as the state of New York was some television drama that people were tuning in to see who had died next. The sick-minded “former” Governor has a long road of questions and accusations to answer.

All of the praises and mentions of Cuomo will soon be erased. And the nation wishes it could erase Cuomo from its annals of history. The thousands of people that needlessly died at his hand could have been saved had he just served the people and looked out for the most vulnerable.

The ex-governor had the worst policies, aside from Gavin Newsom, during the pandemic. Anyone that tested positive would be shipped off to the nursing homes without question. They would be admitted to Cuomo’s COVID-19 prison ward, where they would be used to infect and thin out the elderly population.

The nastiness does not stop at Cuomo’s feet. The Department of Justice and other Democratic leaders failed to thoroughly investigate the crimes surrounding the murders at the nursing homes. They crawled into bed with the man and decided that it would be best to dismiss the matter from public thought silently.

The greed of the man and his thirst for sexual contact is his undoing. His pride toppled him off the pedestal he was placed on by his fellow Democrats. His comrades could not bring it upon themselves to help the people that lost loved ones find closer. It would take the bravery of a handful of women that were willing to stand up and defend their integrity to bring the monster down.