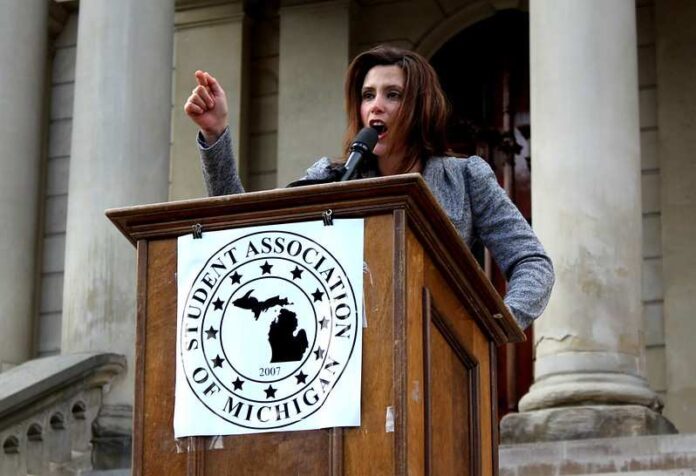 It’s hard to argue with science. Well, unless you’re a Democratic governor set to destroy the economy.

Once again, Gretchen Whitmer has decided to make the residents of Michigan miserable. Rather than pay attention to the recommendations of the CDC and look at the success that many Republican states have had with opening everything up, she’s decided to order a two-week pause.

Just as people were starting to enjoy things opening up, Whitmer has decided to have a panic attack. COVID numbers are on the rise – and so she’s shut down in-person learning and indoor dining. Oh, and youth sports have been paused, too.

At a recent press conference, the Michigan governor explained that she felt it was necessary to deal with the rise in COVID numbers, which is evident across the country.

Despite the vaccine and despite people still doing their part, the numbers are on the rise. It couldn’t possibly be the surge in migrants from the southern border. It also couldn’t be due to factories and other places continuously pushing people together.

Instead, let’s punish the areas where there is the least likely chance of getting COVID – school and a restaurant.

While the two-week pause isn’t a mandate, it is an encouragement for residents to voluntarily participate.

The state has seen a spike in cases – and there’s no real tracking in place to know why.

The problem is that she wants to target all the wrong places. She wants to see youth sports canceled through the rest of the school year.

There have been countless studies to show that youth sports are a highly unlikely source of COVID. The kids aren’t that close together and the under-18 crowd is significantly less vulnerable.

Even the CDC has come out to say that it’s safe for schools to resume in-class learning. Why? Because it’s possible to distance the students and still allow for mask-wearing. It ensures that kids are able to get the education they need without being at high risk of getting the coronavirus.

Whitmer says, “We have to do this together – lives depend on it.”

Really, though? If we listen to the government, we’re supposed to be getting vaccinated as a way to protect ourselves. So, if we’ve been vaccinated, why can’t we enjoy indoor dining? Why can’t we go to a youth sports game?

She’s as much of a Debbie Downer as Dr. Fauci. If it were up to the two of them, we’d go on lockdown for the rest of our lives. Even if the entire country gets vaccinated, there are still risks.

Everyone should have the ability to determine the level of risks they’re willing to take. And if people are getting vaccinated, it severely reduces the likelihood of a severe case of COVID – which means that our lives actually don’t depend on everyone working together and taking a two-week pause.

Whitmer has also called for more vaccines. She’s asked for more of the Johnson & Johnson vaccine from the federal government since it only requires one shot. Although she claims the conversation with Biden was “good,” she also states that there’s no surge strategy being deployed.

She’s one of a handful of states seeing a rise in cases and yet the federal government can’t seem to find enough vaccines to send to the state.

Every single time there’s an issue with the vaccinations and COVID, it’s the Democrats that are struggling with it.

Michigan can’t get COVID under control in lockdown, yet states like Texas and Mississippi are seeing numbers drop while getting rid of mask mandates.

Biden’s administration wants to push the importance of vaccines yet can’t seem to send them to states in the greatest need.

Perhaps the Democrats need to pay more attention to science. If Governor Whitmer would stop locking the state down, people could develop herd immunity and finally see a drop in cases. If Biden would send the state some more vaccines, that could help, too.

It’s common sense, yet it’s lacking across the state of Michigan and throughout the entirety of the Biden administration.