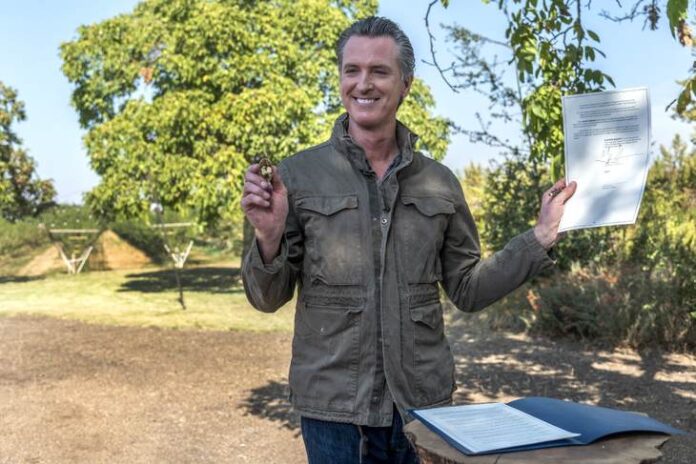 The demonic Democrats are up to their old tricks again by changing the rules before an unfavorable result lands in their lap. Gavin Newsom is up for recall, and he is wanting to try and change the rules to keep himself from losing his governor position.

History tells a clear picture of how Newsom will act to keep himself in politics. In 2017, Josh Newman was the Democrat facing a recall. During the recall effort, the Democrats changed the rules by increasing the number of signatures required. Newman had only won his seat by several hundred votes, so when the Democrats passed unfavorable legislation, the Republicans went after Newman with a vengeance.

That experience was not a favorable one for lying liberals. He has since found his way back to the arena and is looking for blood. He wants to make it legal for a recalled politician to be able to get a copy of the signatures and allow that person to get names and addresses of those that took a stand against them.

The only reason that they would have that kind of information would be to send enforcers to their doors to force them to withdraw their support for a recall. Newman believes that people are being tricked into signing recall documents. He is another Democrat that believes he is more popular than he really is.

He stated that people were asked, “’ ’Are you mad about this gas tax? Sign this petition.’ They didn’t tell them that the actual text of the petition was about recalling an elected state senator.” He has zero evidence that proves what he thinks is true. It is merely a view that is unsupported. He went on to note that “From my view a recall is, in effect, trial by ballot. And you should be able to face your accusers.”

As much as he may want to face his accusers and force them into compliance, he does not have that right. It is not a trial where a person has the right to face their accusers. It is how the people have to recall their lousy politicians, so they are kept accountable to the people.

His introduction of this idea would give Newsom the legal aid he needs to force people to back off. Once a recall happens, there is a time frame of nearly three months where Newsom needs to make people believe that he should remain in office.

Newsom knew about the recall effort, and he did not take the time to fix the errors within his tenure. He has only made them worse.

It is a fancy way of saying to people that they are going to come to their homes and help them change their minds. For all those who refuse to withdraw their signature, there would be stiff punishment for them to experience.

When this version of the bill is read, the question of privacy comes up. No one has the right to pass along private information without consent. So his altered version of the bill will allow him to be able to give the information to a third party to force them to change their minds. What Newman is doing is making it, so his hands stay clean when the matter hits the courts.

Newman’s bill is designed to protect Gavin Newsom. It is a bill that takes away the right of freedom of speech, the right to express one’s opinion without the possibility of threats from opposing powers. His bill mirrors the more robust version of what is found in China, where it is illegal to voice an opinion that differs from the established norm. Expressing opinions is punishable by imprisonment or death.