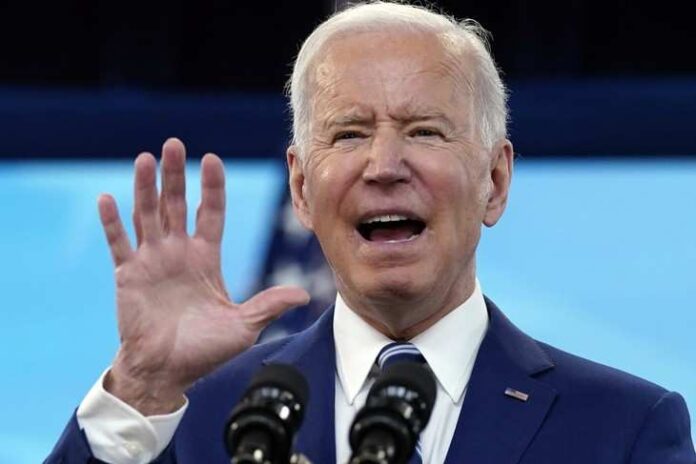 Joe Biden is a man that has to redefine the words that he has to use in order to make himself sound intelligent. His liberal push to have the Democratic Party engage in changing the rules and moving forward with partisan-sided things. Liberals have the audacity to change things to make them fit their agenda.

Biden thinks that a bipartisan bill means that his party is what is needed to move forward. The traditional meaning of bipartisan is that there is significant support from Democrats and Republicans. Biden is crying over the fact that there is not one Republican in the Senate that wants to support his agenda.

So his change to the word is that there must be at least one Republican from somewhere that will cast his support to his crazy laws. And if he can justify that kind of support, he can then move forward and tell the country that everyone is on board with what he wants to do.

His latest attempt to pin a budget-breaking bill on Americans fell short of the support it needed. There was no Republican or Moderate that supported his infrastructure bill because of the damage it was poised to do to the country. Biden has already signed a trillion-dollar relief bill, and now he wants to tax the country to death to pay for things that the country does not need.

In order to trick people into thinking that the nation is accepting of his bill, he has to redefine the very words of the bill and support it. The demon-driven Democratic Party loves the idea of redefining words because it would give them what they need to force people to accept their tenacious ways or face persecution.

BIDEN: “Taking care of elderly parents and kids with disabilities so people can go to work is investing in infrastructure.”

“Chips like the one I have here, these chips, these wafers, are batteries, broadband — it’s all infrastructure.” pic.twitter.com/oAor0ilmsB

The president also has tried to redefine his infrastructure bill. When people think of the name of this bill, they often think about roads and transportation. But the crazy president thinks it means that should include any and everything that the liberals can stuff into the bill and hide from the public eye.

Biden came out and stated that “Taking care of elderly parents and kids with disabilities so people can go to work is investing in infrastructure. Chips like the one I have here, these chips, these wafers, are batteries broadband – It’s all infrastructure.” The last time anyone checked, a chip was a type of junk food.

This ploy by Biden to redefine truth is nothing new. Postmodern thinking is the terminology that means truth is whatever a person believes it to be. So if a boy calls himself a girl, then he must be a girl. A car is now a tree, and a tree is now a dog. The illogical approach to rationalism with this kind of thinking is dangerous and confusing. And that is why Biden and his party are now using it in politics.

Energy Sec. Granholm responds to criticism of the Biden administration’s infrastructure plan: “What is infrastructure? Historically, it’s been what makes the economy move.” https://t.co/MLMwtBqEVj pic.twitter.com/eoAid78NLK

As Biden gives his speech, it is evident that he is reading something that his master has put together for him. Whoever or whatever is running the White House clearly does not want Biden running things. They needed a crazy man to take illogical steps so when everything goes south; they will be able to blame it on him. But they are going to push the issue as far as they can go.

“It’s so much easier to change the meanings of words than to be honest about what we want to do” https://t.co/uEKfyKJPYb

Energy Secretary Jennifer Granholm stated that Biden and the administration wanted to get away from the traditional use of the word so they can do what they want. She noted that “This is the biggest investment in the future of America that we have seen in our lifetime.” Biden is not making an investment. He is trying to indebt Americans to his buddies to the east.

Joe Biden does not have a plan for America. So far, everything he has done was an attempt to steal the work of others that came before him. Or it was an attempt to erase the successes of people before him like Donald Trump. He is the only president to abuse his executive powers by changing laws and controlling money. Both of which he has no power to change Constitutionally.