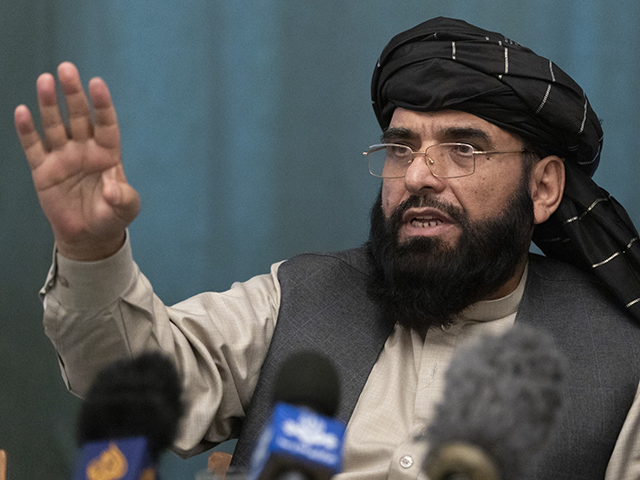 Shaheen’s statement is the first from an official Taliban member to mention the pandemic since the radical Islamist terrorists became the de facto government of Afghanistan on August 15. Shaheen and other spokesmen have repeatedly insisted that the rest of the world recognize the Taliban as the legitimate government of Afghanistan but have yet to announce a head of state, the organization of the government’s bureaucratic structure, or how the Taliban intends of addressing the country’s most pressing governance issues, paramount among them its deteriorated healthcare system.

According to a statement Shaheen posted on Twitter, the deputy director of the Taliban’s political office discussed the future of Afghanistan with Chinese Deputy Foreign Minister Wu Jianghao in a phone call on Thursday.

“The Chinese Deputy Foreign Minister said that they [the Chinese Communist Party] would maintain their embassy in Kabul, adding our relations would beef up as compared to the past,” Shaheen said. “Afghanistan can play an important role in security and development of the region.”

The spokesman did not elaborate on what sort of assistance China would provide. China is the origin country of the Chinese coronavirus and has repeatedly failed to contain its internal outbreaks. While only claiming a little more than 100,000 documented cases nationwide, experts have noted that significant evidence exists that the Communist Party has greatly undercounted coronavirus cases and deaths.

In addition to poor mismanagement of the virus, Chinese pharmaceutical companies are behind some of the least effective coronavirus vaccine products available globally, most notably a vaccine product by the company Sinovac Biotech that tested at only 50.38 percent efficacy against the original strain of Chinese coronavirus, prior to the documentation of the spread of the highly contagious Indian “delta” variant.

Prior to the rise of the Taliban rule in the country, Afghanistan recieved donations of another Chinese coronavirus vaccination product by Sinopharm, another Chinese pharmaceutical company. The former Afghan government also procured supplies of vaccination products from European company AstraZeneca and American company Johnson & Johnson, and Chinese company Sinopharm. Reports suggest that coronavirus vaccination has come to a near-complete halt in the country since the Taliban terrrist group took over.

Prior to remarks Thursday, Taliban spokesmen and leaders had not mentioned the pandemic at all, despite repeat public apperances. In several press conferences, reporters also failed to question spokesman Zabihullah Mujahid on the topic. The little attention paid to the pandemic in Afghanistan appeared to come from some public health academics who speculated aloud that the Taliban’s repressive sharia rule may lead to “great social distancing.”

Afghanistan has documented 153,375 cases of coronavirus as of Friday, according to the World Health Organization (W.H.O.), and a little more than 7,000 deaths. Given the country’s near-total inability to test for the virus, most experts believe the true infection rate is far higher.

The W.H.O., a U.N. agency that has attempted to lead the global effort against the Chinese pandemic, stated in the immediate aftermath of the fall of the Afghan government that it was “committed to staying in Afghanistan and delivering critical health services and calls on all parties to respect and protect civilians, health workers, patients and health facilities.” The agency emphasized the need for emergency care for victims of the war, however, and mentioned offering “essential supplies” for coronavirus management only in passing. Its statement did not mention the Taliban.

Last week, the W.H.O. again told reporters that it was attempting to send emergency supplies to Afghanistan, hinting that Taliban jihadists were cooperating with the U.N. organization.

“One of the challenges we have in Afghanistan right now is there’s no Civil Aviation Authority functioning,” Regional Emergency Director with the W.H.O. Office for the Eastern Mediterranean (EMRO) Richard Brennan said, “But we are working with the Pakistanis, particularly in the context of Mazar-i-Sharif Airport, because they can work with contacts on the ground to ensure that all the necessary steps to land an aircraft, to land a cargo aircraft, can be put in place.”

Brennan observed that one significant problem with Afghan health care was that women in health worker positions were no longer aiding hospitals and clinics with their work. Brennan did not mention the Taliban or note that Taliban jihadists had commanded all women to stay home indefinitely.

Coronavirus support may be one of the many ways that the Chinese Communist Party becomes a top influencer in the Taliban government. The second-in-command at the Taliban’s “political office” in Doha, Qatar, Abdul Salam Hanafi, said this week that the jihadists expect the communists to invest heavily in Afghanistan and they, in turn, expect to support China’s Belt and Road Initiatve (BRI), a global debt trap scheme in which China tricks developing and poor countries into predatory loans allegedly meant for high-tech infrastructure projects.

Zabihullah Mujahid, a Taliban spokesman, also said this week that the radical Islamist terrorists “care a lot about the belt and road project.”