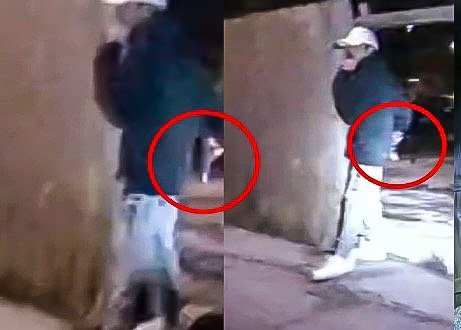 We would like to issue a fair warning to anyone who is about to read this story and/or watch the video attached. The footage is graphic and it was taken from a Chicago police officer’s body cam. Again, the footage is very graphic and we do not advise anyone who has a weak stomach to watch.

On March 29, an unidentified police officer fatally shot a 13-year-old named Adam Toledo. The officer chased him down an alleyway and he was armed at the time. The boy is said to have thrown the gun in the moments before the shooting took place.

“Police, stop. Stop right f*cking now!” yelled the officer who was in hot pursuit of the sprinting boy. “Hey show me your f—ng hands, drop it!” This is when the officer opened fire. Toledo was still alive and bleeding from the mouth when the officer shot him.

The officer did what they could to save the boy’s life, pumping his chest and calling for a medic. Unfortunately, it was too little, too late. Toledo could not be saved and ended up perishing from one single gunshot wound. Chicago Mayor Lori Lightfoot tried her best to get out in front of the footage.

She urged the city to remain calm and peaceful before the footage was released. “Chicago Police have released the body camera footage of the police shooting death of armed teen, Adam Toledo, who was known in gang circles as “Lil’ Homicide” and “Baby Diablo,” Andy Ngo shared.

Now, we are trapped in the same position that we have been in for the past year. People are going to be upset about this and we do not wish to minimize their feelings. On the other hand, anyone who wants to look at the full spectrum of what took place here is going to told that they are a racist.

It puts people between a rock and a hard place. The mainstream media is already making things much, much worse. They want everyone to believe that Toledo was unarmed when the police shot him. That is not the case and if they want people to have a true idea of what went on, they need to tell the whole story.

What is wrong with presenting all of the facts and allowing people to come to their own conclusions? This is one of the single most frustrating aspects of the Joe Biden mainstream media complex. The media mob lies about this like they lie about everything else. They don’t want people to develop their own educated takes on the things that happen.

Chicago Police have released the body camera footage of the police shooting death of armed teen, Adam Toledo, who was known in gang circles as “Lil’ Homicide” and “Bvby Diablo.” https://t.co/6sv4Rg813v pic.twitter.com/81lwI36ik9

Tributes to deceased armed teen Adam Toledo by his friends refer to him by his gang names, “Lil’ Homicide” and “Bvby Diablo.” pic.twitter.com/L9WOBNb3Hv

Instead, they spoon-feed them the version of the story that they want out there and then they work overtime to silence the people who are more skeptical. No one likes to be told that they are a racist just because they are not willing to be pushed into whatever tiny boxes the mainstream media has for them. This should be obvious but it isn’t.

We want one of these stories to be told in a truly nuanced manner, so that people would be able to choose the right side…as opposed to the side that the media wants them on. Police shootings deserve to be spoken about with the correct level of bipartisanship. The victims and the officers who are involved should have their stories told in a way that makes logical sense. That’s too much to ask, though.

Now, the sad story of this child’s life is going to fall by the wayside because the mainstream media is too busy trying to politicize it. No one who claims that they care about these tragedies ever reckons with that aspect of it. Our thoughts and prayers are with the child’s family. Our hearts also go out to all of the Chicago residents who are probably going to be locked inside for the next few days. The looting is going to be widespread.