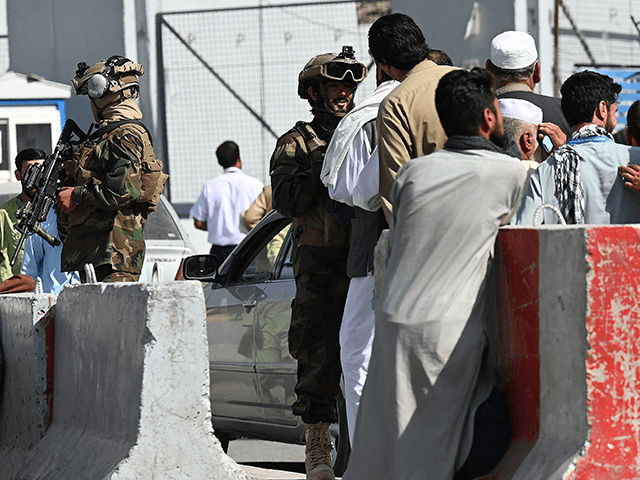 A report from CBS News, which spoke with NGO and congressional sources, claimed the jihadist organization is not giving permission for any of the planes to leave Mazar-i-Sharif airstrip in northern Afghanistan even though they have permission to land in Doha.

The report claimed to have seen excerpts from a State Department email to members of congress that there are chartered flights on the airstrip, saying “if and when the Taliban agrees to takeoff,” the planes have the necessary permission to land in Doha.

Some sources from congress and an NGO are claiming “there are at least two physical planes on the ground and six more with approved clearance,” noting, “The obstacle is the Taliban, which controls the airport and is not letting people board or the planes take off.”

An NGO group, Ascend, told the news organization they have now been waiting six days to take between 600 and 1200 people. In the group of people, there are said to be 19 U.S. citizens and two permanent residents.

Ascend’s Executive Director Marina LeGree told CBS, “The U.S. airfield in Qatar that has been standing by, ready to receive, is now beginning to pack up. …We hope visibility will add pressure to force a solution. Six days of talks are not encouraging.”

Congressional members were also allegedly told by the state department that they are supposed to tell groups trying to evacuate out of the airstrip in northern Afghanistan that the U.S. “does not have personnel on the ground in Mazar, we do not have air assets in the country, and we do not control the airspace.”

“It is a Taliban decision to ground fights in Mazar-i-Sharif,” the email also said, according to the report. “We are, however, providing guidance and assistance to the extent possible — and with an emphasis on safety– to private entities working out of Mazar.”

Republican Rep. Michael McCaul (TX), who is the top Republican on the House Intelligence Committee, told Fox News Sunday the jihadist organization is now holding U.S. citizens and Afghan allies “hostage” so they can get something from the U.S. in return:

We have six airplanes at Mazar Sharif Airport, six airplanes with American citizens on them as I speak, also with these interpreters, and the Taliban is holding them hostage for demands right now. They — we — the state has cleared these flights and the Taliban will not let them leave the airport … And that’s my concern is they’re going to demand more and more, whether it be cash or legitimacy as the government of Afghanistan.

Well, they are not — they are not clearing the airplanes to depart. They’ve sat at the airport for the last couple of days, these planes, and they’re not allowed to leave. We know the reason why is because the Taliban want something in exchange. This is really, Chris, turning into a hostage situation where they’re not going to allow American citizens to leave until they get full recognition from the United States of America.

My concern is that Zalmay Khalilzad or special envoy who’s met with the Taliban, they’re in talks right now and I think — I — I worry his recommendation to the administration will be to recognize the Taliban as the official government of the United States, a Taliban organization that is a terrorist organization. [Emphasis added]

Republican Sean Parnell, the Trump-endorsed candidate for a Pennsylvania U.S. Senate seat and an Afghanistan war veteran who led the infamous “Outlaw Platoon” for over a year experiencing heavy fighting against the Taliban in Afghanistan, responded to the news blaming President Joe Biden.

“There is now an American hostage crisis in Afghanistan because @JoeBiden decided it was more important to honor a commitment to the Taliban to leave by 31 August rather than evacuate American citizens,” Parnell tweeted. “Just an unbelievable betrayal of our people.”

Members of Congress were told in the email from the state department they are going to continue to “monitor” the situation on the ground with the terrorists grounding the flights and in return work with lawmakers.