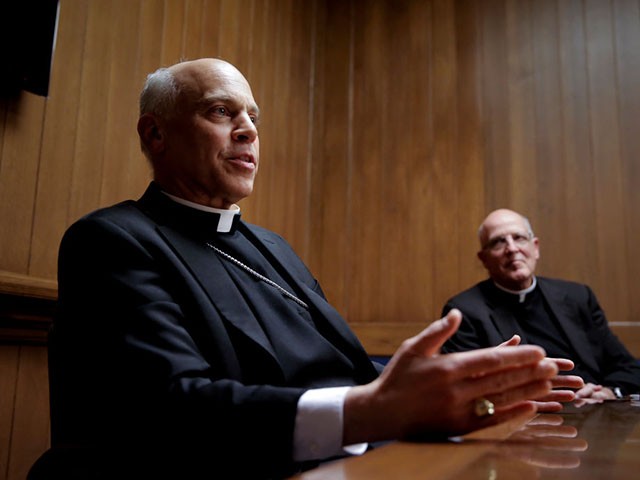 In an op-ed for the Washington Post, Cordileone defended the recent law in Texas that bans abortions after six weeks and lamented the hysterical reactions from Joe Biden and Nancy Pelosi:

US President Joe Biden (C) and First Lady Jill Biden (L) speaks with a priest as they leave St. Joseph on the Brandywine Catholic Church in Wilmington, Delaware, June 19, 2021. – US Roman Catholic bishops issued a challenge on June 18 to President Biden over his support for abortion rights, agreeing to draft a statement on the meaning of holy communion which could potentially be used to deny the sacred rite to the US leader. (Photo by Olivier DOULIERY / AFP) (Photo by OLIVIER DOULIERY/AFP via Getty Images)

Characterizing abortion as “the preeminent human rights issue of our time,” Cordileone then defended the Catholic position that pro-abortion politicians should be denied Holy Communion to avoid scandalizing the faithful and, most of all, to bring the politicians to repentance. As an example, he cited the work of former New Orleans Archbishop Joseph Rummel, who fought against racism within his own diocese at the height of Jim Crow and white supremacy:

In 1948, he admitted two Black students to New Orleans’s Notre Dame Seminary. In 1951, he ordered the removal of “white” and “colored” signs from Catholic churches in the archdiocese. In a 1953 pastoral letter, he ordered an end to segregation throughout the archdiocese of New Orleans, telling White Catholics that, because their “Colored Catholic brethren share … the same spiritual life and destiny,” there could be “no further discrimination or segregation in the pews, at the Communion rail, at the confessional and in parish meetings.”

In 1955, Rummel closed a church for refusing to accept a Black priest. In a 1956 pastoral letter, he declared: “Racial segregation as such is morally wrong and sinful because it is a denial of the unity and solidarity of the human race as conceived by God in the creation of Adam and Eve.” On March 27, 1962, Rummel formally announced the end of segregation in the New Orleans Catholic schools.

Many White Catholics were furious at this disruption of the long-entrenched segregationist status quo. They staged protests and boycotts. Rummel patiently sent letters urging a conversion of heart, but he was also willing to threaten opponents of desegregation with excommunication.

On April 16, 1962, he followed through, excommunicating a former judge, a well-known writer and a segregationist community organizer. Two of the three later repented and died Catholics in good standing.

After citing the death of 60 million unborn children at the hands of abortion while acknowledging the need to help destitute mothers, Cordileone concluded his op-ed declaring that Catholics simply cannot approve of abortion.

“You cannot be a good Catholic and support expanding a government-approved right to kill innocent human beings,” he concluded. “This is hardly inappropriate for a pastor to say. If anything, Catholic political leaders’ response to the situation in Texas highlights the need for us to say it all the louder.”

According to the Catechism of the Catholic Church, abortion is a grave moral evil that cannot be approved or tolerated in any circumstance. In 2019, a Catholic priest in South Carolina reportedly enforced the church’s code of canon law by denying the then-former Vice President Joe Biden the sacrament of Holy Communion because of his stance on abortion.

“Sadly, this past Sunday, I had to refuse Holy Communion to former Vice President Joe Biden,” Father Robert E. Morey of Saint Anthony Catholic Church told reporters. “Holy Communion signifies we are one with God, each other, and the Church. Our actions should reflect that. Any public figure who advocates for abortion places himself or herself outside of Church teaching.”