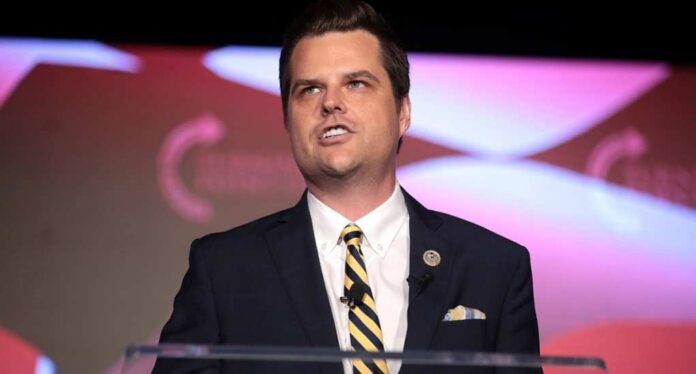 Did he or didn’t he? This isn’t a Clairol commercial, this is a question of whether or not Representative Matt Gaetz from Florida’s 1st Congressional District had sexual relations with a minor, an allegation Gaetz strenuously denies.

CNN — aka the Communist News Network — has put facts last in their coverage of Gaetz, smearing the representative with distortions and lies morning to night while there is an ongoing FBI investigation. The pedophiles at CNN can’t resist.

While the FBI is conducting their investigation, undercover journalism outfit Project Veritas conducted an investigation of their own. One of Project Veritas’ undercover agents targeted a CNN director and went on several dates with him, getting him to say out loud what everyone already knew: they are an ideological propaganda machine.

With their video unveiled this week, Project Veritas shows CNN Technical Director Charlie Chester describing how CNN is attacking Matt Gaetz and “going to keep running those stories to keep hurting him,” because “He’s a problem for the Democratic Party because he’s so conservative.”

“He is witness to decisions being made, and who they are coming from. He has full access to the culture within the network and explains — on video — how company-wide directives are being implemented,” O’Keefe added.

But James O’Keefe doesn’t have to explain anything, because we can hear it directly from the horse’s mouth: CNN Technical Director Charlie Chester is more than happy to describe, in great detail, the machinations of CNN’s propaganda machine:

This propaganda directive has been borne out in CNN’s coverage of Matt Gaetz, with anchors like Chris Cuomo breathlessly covering the smears on “Cuomo Prime Time.” Chris Cuomo will do anything to distract from his corrupt brother, the governor of New York Andrew Cuomo, who is tarred with a growing line of sexual assault accusations and under FBI investigation himself for covering up nursing home deaths.

Gaetz and his legal team are fighting back against CNN’s lie machine, as they launder their propaganda through the use of “anonymous” sources. After one smear story cited “two people familiar with the matter,” the Friends of Matt Gaetz Campaign Committee lawyer Geoffrey R. Johnson blasted the network and issued a letter that demanded a retraction.

“The April 11 story, like previous CNN stories about Rep. Gaetz, relies solely on anonymous sources, and propagates a false narrative that Rep. Gaetz is being isolated and abandoned by former supporters, including former-President Trump,” said Johnson.

Senior Trump Adviser, Jason Miller, also confirmed that the report was fake news, saying that “Take note that this story has zero on-the-record sources. It’s literally made-up. We are demanding a full retraction.”

No such scheduling or meeting request was ever made, and therefore, it could never have been declined.

We are demanding a full retraction. #FakeNews https://t.co/lhlChvilhF

As Matt Gaetz was leaving Capitol Hill this week a pack of CNN reporters hounded him, asking him for comment on the lies they just told. Gaetz responding by calling out their propaganda machine and suppression of Project Veritas’ evidence for their plot against him and conservatives.

You refused to answer my questions about the Project Veritas video wherein your colleague details your network’s plot to attack me because I’m effective at blocking the Democrat agenda. #ExposeCNN https://t.co/qOLdpQFyX0

“You refused to answer my questions about the Project Veritas video wherein your colleague details your network’s plot to attack me because I’m effective at blocking the Democrat agenda,” said Gaetz. “Well, I think you can read my essay in the Washington Examiner. I think you can check out the work that your network has done to propagandize lies about me. I think that really ought to concern you, Manu. You’ve always considered yourself a real journalist, but that doesn’t strike me as real journalism.”

Is there any question where CNN stands? Not with the American People. They are not a news organization. They are the Democratic Party’s public relations team, with their own perverted agenda of lies, destruction, and division.