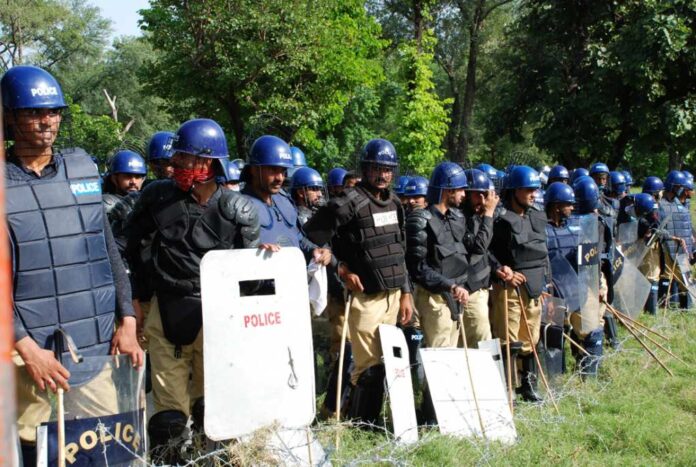 It seems odd how even in war-torn Pakistan there are limits set on which Islamic radical groups are considered acceptable. The Tehreek-e-Labaik Pakistan party is so hardline that their own government has outlawed them. Yet the group still receives a good deal of support from citizens, and with their help, they just fully displayed how they refuse to play games.

Following the arrest of their leader, Saad Rizvi, the outlawed radicals attacked a police station in the city of Lahore where they took 11 of the cop’s hostage. They released them a day later but from the bandages, cuts, and bruises, it was clearly evident how it had been a rough 24 hours in captivity. They were wrapped in bandages and had clearly been tortured.

The group not only demanded the release of their head honcho, but they also want to see France’s envoy in Pakistan kicked out of the country over some controversial cartoons that were published and they’re pressuring prime minister Imran Khan to punish France over this defamation of character without further delay. No one should be allowed to hurt their feelings that way.

After only one round of talks, Khan said he would recruit other Muslim countries to help halt any and all blasphemous content against anything related to Islam from being published anywhere again to compensate for their thin skin. He claimed that Islam is the constant target of exploitation by both political and religious parties worldwide.

Khan also said that with America withdrawing its troops, and other countries certain to follow suit, that no one should mind if Pakastani’s choose to continue fighting among themselves, which they no doubt will for all eternity. It’s their business and theirs alone.

The whole thing started last year when a French satirical publication released some caricatures of Islam’s sacred prophet in a not-so-good way. This got the Muslim world steamed up, but the pot didn’t boil over until France’s leader, President Emmanuel Macron, defended the publication.

Interior Minister Sheikh Rashid Ahmad said that supporters of the radical group set up roadblocks at 192 places, but Pakistani government security forces were able to clear 191 of them which consisted largely of sit-down protestors. Supporters of Risvi continue to rally in Lahore where the 11 police were seized, but Ahmad said he is confident they will disperse on their own as talks continue.

Ahmad’s comments were made public just hours after police, joined by paramilitary troops, assaulted the protesters with batons, tear gas, and a few flying bullets that left three protesters dead. Dozens more were injured, some severely. This was in response to the police station attack and the 11 hostages being held, which included Deputy Superintendent Umar Farooq Baluch.

Religious parties in Pakistan, thinking the police and the troops were a bit too rough on the demonstrators, called for a nationwide strike. Their appeal at least received a response in Lahore and Karachi where businesses and markets remain closed.

Pakistan’s government banned the media from covering anything related to Rizvi and his illegal radical party which has resulted in widespread condemnation from journalists. They claim this only encourages the group who are also responsible for leaving four police officers dead in the northern part of the country in a previous clash in which six demonstrators were also killed.

Rizvi was arrested just one day after he demanded that the government honor their previous promise of expelling France by the agreed-upon date of April 20, which is not being met. All over some cartoons.

Let’s not forget this is Pakistan. A country where if you don’t like something, no problem. It’s easy enough to form your own party and quickly attract easily influenced Islamists to stand up for whatever the cause might be. Even to the point of death if need be.

Prime Minister Imran Khan was correct when he said the West doesn’t care if they go on fighting internally. Our troops are bailing out specifically for this purpose. They’re doing a good enough job of killing each other to need our help.

Here’s the question we are forced to ask. Do you care?