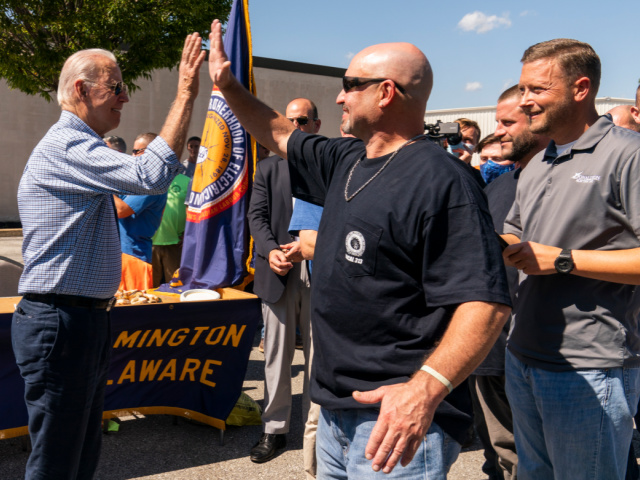 According to the Associated Press, the president visited an event orchestrated by the International Brotherhood of Electrical Workers Local 313 in New Castle, Delaware, where he served sandwiches from Capriotti’s, a Delaware restaurant chain founded in 1976.

“He shook hands and chatted with the group of mostly men, who were clad in jeans and union T-shirts,” reported the AP. “Biden spent several minutes chatting with the union members in groups before telling them, ‘C’mon, let’s go get something to eat.'”

Biden later told a union member’s mom that he has been a proud supporter of the union since he was first elected to public office in the 1970s. The IBEW endorsed Biden for president during the 2020 election, hailing him as a strong protector of workers’ rights and the man to fight climate change:

What makes Joe Biden different isn’t just his support for our rights on the job, but his support for good energy jobs. Eighty-five percent of IBEW members work in the energy industry, and our country needs a realistic plan to combat the ongoing threat of climate change without putting energy security or working families at risk.

Joe Biden has listened to IBEW members, and his energy policy has been shaped by deep, meaningful conversations with the professionals who will build and maintain the energy grid of the future. He backs an all-of-the-above approach to slashing carbon emissions. He also has proposed the largest-ever investment in clean-energy technology, as well as an aggressive clean-power infrastructure plan that will make the United States a global leader in fighting climate change, while putting tens of thousands of Americans to work building the energy economy of the future.

While Biden has touted himself as a proud supporter of the American working man, the economy under his leadership has demonstrated the exact opposite. As the U.S. Bureau of Labor Statistics recently announced on Monday, “real average hourly earnings for all employees decreased 0.1 percent from June to July.”

“Businesses across America are paying their workers more as they struggle to fill a record number of open positions,” Breitbart reported. “Wages increased four-tenths of a percentage point in July. But prices are rising even faster. The Consumer Price Index rose five-tenths of a point.”