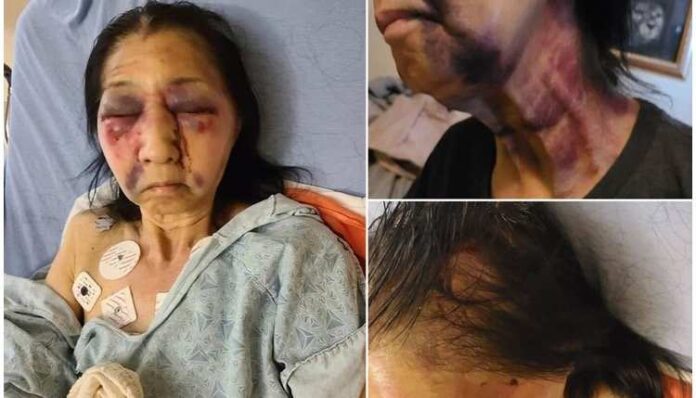 A 70-year-old Mexican woman was brutally assaulted by a young black woman for the wrong reasons and we are tired of seeing stories like these. This 23-year-old woman attacked the woman under false pretenses. Her hair was yanked out, concussion, broken nose and black eyes. Yasmine Beasley beat the victim after her son referred to the woman as a “Becky”.

As the grandmother was beaten up, Beasley was tossing all sorts of anti-Asian slurs. KTLA 5 has a more detailed report:

“A 70-year-old woman was left with a concussion, severely battered face and other injuries after being assaulted by a fellow passenger on a Metro bus in Eagle Rock last week, her son told The Eastsider.

The Mexican American victim was profiled as Asian by her attacker, who hurled a racial epithet used against people of Chinese descent before attacking the grandmother as she got off the bus to go grocery shopping, according to the son, who gave his name only as Pete.

Los Angeles police say they are still gathering information on the incident. But a department spokesperson confirmed 23-year-old Yasmine Beasley was arrested following the incident at about 1:30 p.m. Friday at the corner of Figueroa Street and La Loma Road,” the KTLA report shares.

This attack has yet to be widely discussed in the mainstream media outside of Los Angeles, though. It is funny how this works. If this vicious assault had been carried out by a white person, we never would have heard the end of it and everyone knows this. CNN and their ilk would have led with it first thing in the morning and the cable news networks would have focused on it all day.

Whenever something like this would happen and if there was a white person to blame? The mainstream media would have a field day telling everyone that Trump is the one who planted the seed for the hateful events to occur. As it turns out, they do not believe that anyone has agency of their own. No one can be a bad person who does a bad thing, Trump is the mean orange man that put them up to it.

Make no mistake about it: all of these attacks are wrong. There is no excusing them based on particular situations. Our beef is with the people who cover them. If anti-Asian assaults are a bad thing all of the time, then they need to be discussed in that manner all of the time.

Cruelty is an unfortunate aspect of human nature. For all of the good deeds that are done in the world, there are some who cannot help but to commit acts of evil. That’s why reporting outlets have a certain responsibility to tell the whole story and give people a clearer picture of what is going on.

Without the honesty of the mainstream media news outlets, people are going to be left to draw their own conclusions and this is not something that anyone should want. We want to see fair and unbiased reporting, not a collection of the stories that the news station thinks we should see.

These are the editorial decisions that take place on a daily basis. Anyone who disagrees with them is called a racist or told that they do not know what they are talking about. It’s not rocket science, though. Biden controls the media mob now and they are only going to share the stories that they want you to have. The last thing that he wants is to provide us with full transparency.