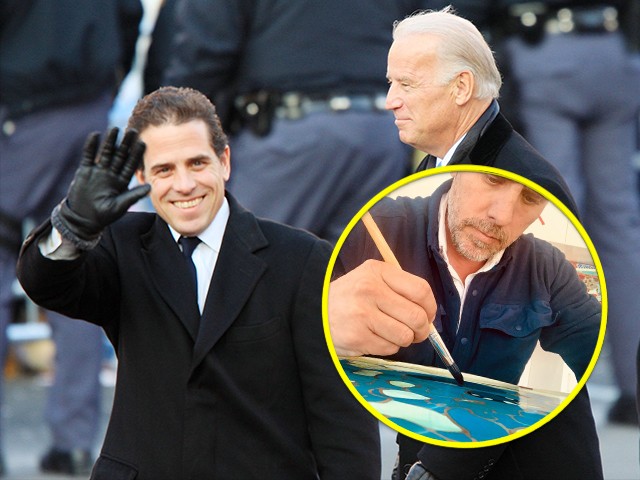 In a congressional letter addressed to Hunter’s art dealer, Georges Berges, Comer notes it “is the Oversight Committee’s responsibly to scrutinize Mr. Biden’s business activities because he [Berges] chooses to conduct them in the most murky and corrupt corners of international affairs.” The letter also speaks to Berges’ connections to China and the art industry’s “commodities of fluid and opaque value” that “evade sanctions”:

Moreover, he has chosen–in the latest iteration of his career–to sell commodities of fluid and opaque value to anonymous benefactors. Mr. Biden acknowledges it is “a hell of a lot easier to get noticed” as an artist due to his family name.

Given Mr. Biden’s connection to the White House, his network of foreign associates, your efforts to become the “lead guy in China” for art, and history of foreign nations that have “used transactions involving high-value art to evade sanctions imposed on them by the United States,” the extent and nature of your dealings with Mr. Biden must be subject to the same scrutiny.

Comer’s press office in a statement also suggested Hunter’s art dealings are concerning due to the artists’ “new, untrained, celebrity” and for “the Biden family’s historic precedent of using proximity to political power for self-gain”:

Given the history of foreign governments using high value art to evade U.S. sanctions, the unprecedented prices which Hunter Biden–a new, untrained, celebrity artist– is selling for, and the Biden family’s historic precedent of using proximity to political power for self-gain.”

Ranking Member Comer is demanding information and communications between the gallery and Hunter Biden, including the individuals who have purchased the art or indicated an interest in purchasing his art via attendance at his art shows.

Previously refuting any concerns over the art scheme, White House press secretary Jen Psaki stated in July that Hunter “has the right to pursue an artistic career” by selling “artwork” to an anonymous buyer for as much as $500,000, despite concerns that Hunter Biden is still invested in “CCP [Chinese Communist Party]-linked firms.”

Berges would set the prices for the artwork and withhold “all records, including potential bidders and final buyers,” Washington Post reported. “The owner, Georges Berges, has also agreed to reject any offer that he deems suspicious or that comes in over the asking price, according to people familiar with the agreement.”

Hunter Biden walks to Marine One on the Ellipse outside the White House May 22, 2021, in Washington, DC. (Photo by Brendan Smialowski / AFP) (Photo by BRENDAN SMIALOWSKI/AFP via Getty Images)

But when Psaki was asked if Hunter will undergo ethics training while his father is President of the United States, Psaki ignored the reporter’s direct question by suggesting Hunter “is not involved in the sale or discussions about the sale of his art,” and Hunter will not be “informed” of “who is purchasing his art.”

“The only way to address these issues is with greater transparency — not less,” he told Breitbart News. “Their proposed solution is greater secrecy, not transparency. And they are essentially saying, ‘Trust Us.’ Joe and Hunter Biden’s track record on such matters gives us no reason to trust them.”

Hunter responded to his critics by suggesting selling art for $500,000 to anonymous investors is a “pretty courageous thing to do.”

“I’m [the] most famous artist in MAGA world, at least,” Hunter facetiously said before suggesting President Joe Biden believes “everything” Hunter does “should be in National Gallery” of Art.