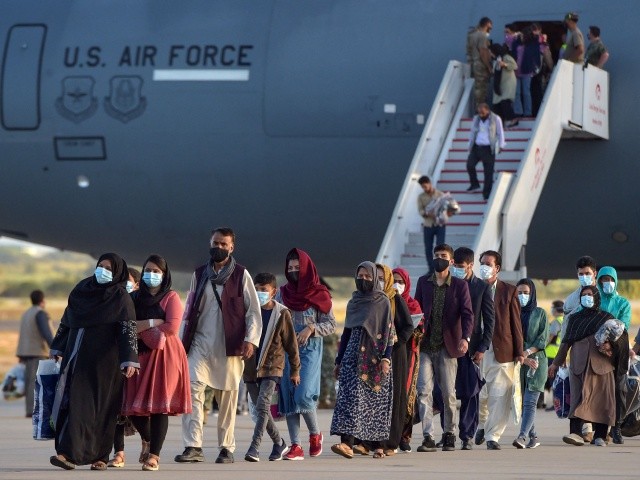 As Breitbart News reported on Wednesday, Biden turned the fast-track citizenship for Afghans plan into a budget request to Congress.

Cotton slammed the request as “just another chapter in Biden’s rolling fiasco of an Afghanistan policy” in a statement:

Joe Biden left behind thousands in Afghanistan who already have American citizenship, green cards, or pending visas, but now he wants to award unlimited green cards to people who didn’t serve alongside our troops and who may even threaten our safety and health — all while exempting them from the normal refugee screening process. [Emphasis added]

Cotton’s office said the Biden plan would allow “any Afghans who come to the United States over at least the next year to obtain green cards, backdated to the day they entered the country, without completing the normal refugee screening or approval process” while also not counting the Afghans against annual refugee caps.

“The only screening required under the proposal is whatever screening Secretary Mayorkas deems sufficient,” Cotton’s office wrote in a brief:

The proposal also gives Secretary Mayorkas explicit authority to waive any grounds of inadmissibility (including criminal records or ties to terrorism) if he feels it is useful for ‘humanitarian purposes, to assure family unity, or when it is otherwise in the public interest.’ [Emphasis added]

This week, Biden requested Congress to authorize at least $6.4 billion in American taxpayer money to provide assistance and resettlement support to about 95,000 Afghans that he hopes to bring to the U.S. over the next 12 months.

Though Biden has pitched the Afghan resettlement as a commitment to the nation’s allies, the overwhelming majority of Afghans arriving in the U.S. do not qualify for Special Immigrant Visas (SIVs) or P-2 visas. Those visa programs are reserved only for Afghans and their families who worked directly for the U.S. Armed Forces.

Instead, Afghans are mostly arriving on “humanitarian parole” and refugee status. An estimated 50,000 Afghans will be brought to the U.S. as parolees, where they will stay at a number of U.S. military bases and receive one-time $1,250 payments.

Most Afghans arriving in the U.S. have not completed their immigration processing.