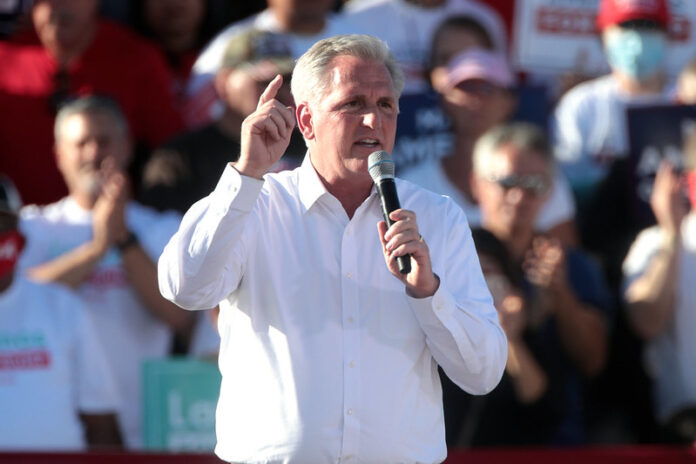 Republicans seem to be finally stepping up the play and taking their swing as House Minority Leader Kevin McCarthy (R-CA) announced, nay, demanded, on Sunday that House Speaker Nancy Pelosi (D-CA) take the same type of action against Rep. Maxine Waters (D-CA) that was taken against Republicans following the Capitol Hill riots.

You see, this battle of the California representatives seems to be the first indication that Republicans are realizing they’re not in a gentleman’s war anymore (and not just because women are involved). Democrats are getting down and dirty and taking whatever tacts they can to win, and the chiefest offender is Waters.

She can be seen regularly on several major news networks, spewing aggression, hate, and often bald-faced lies, in an ongoing offensive onslaught against conservatives. But, conservatives finally have a leg to stand on holding Waters feet to the fire, following Democrats’ treatment of Republicans who were supported by the Jan. 6 rioters in Washington D.C.

“Maxine Waters is inciting violence in Minneapolis — just as she has incited it in the past,” McCarthy said in a statement according to The Daily Wire. “If Speaker Pelosi doesn’t act against this dangerous rhetoric, I will bring action this week.”

Maxine Waters is inciting violence in Minneapolis — just as she has incited it in the past. If Speaker Pelosi doesn’t act against this dangerous rhetoric, I will bring action this week.

The minority leader’s assessment came after Brooklyn Center, Minnesota was once again rocked by turmoil and just days before the verdict in the Derek Chauvin case.

“We’re looking for a guilty verdict. We’re looking for a guilty verdict. And we’re looking to see if all of this [inaudible] that took place and has been taking place after they saw what happened to George Floyd,” Waters said. “If nothing does not happen [sic], then we know, that we’ve got to not only stay in the street, but we’ve got to fight for justice, but I am very hopefully and I hope that we’re going to get a verdict that will say guilty, guilty, guilty. And if we don’t, we cannot go away.”

According to the Wire’s report, Waters was also asked what activists should do to respond if Chauvin isn’t convicted, to which she replied that they must “stay on the street.”

McCarthy isn’t the only influential person who thinks Waters is out of line. The New York Post Editorial Board said they believed that Waters was “trying to create a Civil War” and urged that Pelosi (D-CA) “should strip her of her committee assignments and move for a vote to remove Waters from office,” and several other elected officials and political pundits shared their disdain with her comments:

“Democrats actively encouraging riots & violence. They want to tear us apart,” Sen. Ted Cruz (R-TX) said. “‘We gotta stay on the street,’ Waters was recorded saying, adding that protesters needed ‘to get more confrontational’ & they should ignore the curfew in place.”

“Maxine Waters is trying to intimidate a jury to influence the outcome of a murder trial. Every elected Republican in the country should be calling for her immediate arrest and removal from congress,” podcast host and conservative commentator Matt Walsh said. Steven Crowder weighed in saying that, “If Trump was removed from Twitter AND Facebook for ‘inciting violence’ then Maxine Waters needs to be federally charged and impeached.”

Democrat and former CIA officer Bryan Dean Wright called, “Maxine Waters is a threat to the Republic while attorney and columnist Kurt Schlichter said of Waters comments, “This is an insurrection.”

Tim Pool, podcast host: “Maxine Waters says that Chauvin premeditated the murder of George Floyd and that if Chauvin is not convicted [of] a crime he wasn’t charged with they should get ‘more confrontational[.]’ More confrontational than burning down buildings?”