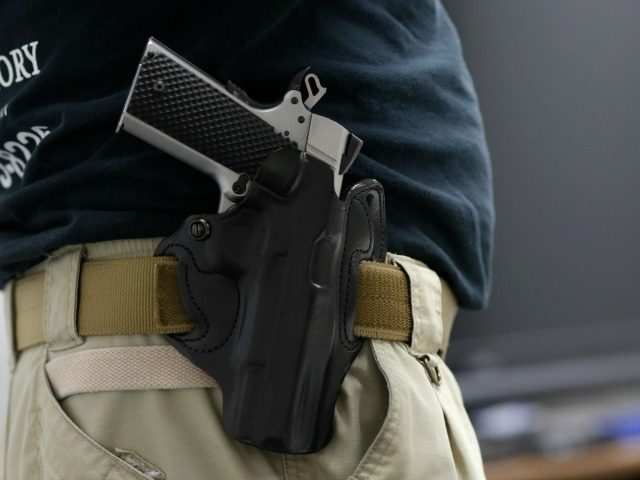 The Lone Star state is once again infuriating liberals and blazing the path to second amendment glory, throwing off the bonds of liberal aggression with a state bill that has passed its first hurtles which would abolish the state’s requirement for  law-abiding citizens acquire a permit from the state before exercising their right to bear arms.

Breitbart News published a story in which they quoted CBS DFW who reported that the House passed the legislation, House Bill 1927, on a vote of 84 to 56.

HB 1927 came to the state legislator sponsored by State Rep. Matt Schaefer (R-Tyler), who had the misfortune of having to hear State Rep. Joe Moody (D-El Paso) suggesting that a permitless approach helps criminals (by, you know, making it easier for law abiding citizens to actually carry what they’d need to defend themselves).

Schaefer responded, “Criminals don’t care about our gun laws and so they have an advantage over the vulnerable.”

The Texas Tribune also reported on the bill, saying that Schaefer suggested the permit requirement creates a situation where self-defense can be cost prohibitive. The representative told the story of two law abiding, well meaning women who both went for a walk, one of whom had the resources to get the permit she needed to legally carry a handgun, and the other did not. Schaffer pointed out that while both lives were valuable, one woman was able to arm herself and feel safe, while the other was not.

Representative Celia Israel, D-Austin said, “Mr. Schaefer, you’re saying on one hand the training is valuable and helpful and on the other hand, waiting is an inconvenience.”

Schaefer responded, “I’m saying it’s not always an inconvenience, it can be a matter of life and death for some people.”

Despite the harsh pushback by the left, there has yet to be a clear and concise argument that puts into its own place “lawbreakers are already breaking laws” when it comes to carrying a handgun. Their argument that it makes guns more readily available would make sense if guns were totally illegal, like, say drugs like meth or cocaine.

The lack of ability to accept that guns are helpful to not only defend oneself against the individual attacker, begs the question, why are those on the left so concerned about the nation having firearms?

The obvious answer is that the fox is guarding the hen house: essentially, anyone in favor of big government the way most on the left are, has to live in constant fear of what is the one thing they’ll push on the American people that could push them too far.

The obvious next question is, what might “we the people” do if pushed too far? Well, the answer to that question becomes much less virulent, and possibly dismissible altogether, if the people are all bark and no bite. The battle becomes entirely winnable if the other side is unarmed.

35,900,913 people held hunting licenses in the year 2019, according to Fish and Wildlife Services (and let’s be honest, that’s not even counting the millions more spouses that only hunt “occasionally” and the licensed spouse covers with their tags if need be). That is by far and away the largest army ever known to man, and it’s the one thing standing between liberals and control of the whole world. That’s how high the stakes are.