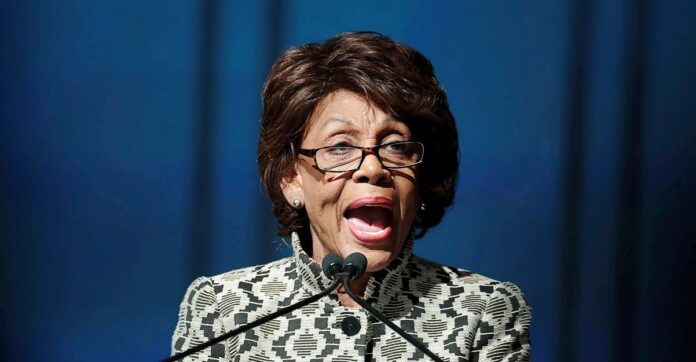 Rep. Maxine Waters (D-Calif.) might have her charmed political bubble burst thanks to a bipartisan push to punish the California Democrat over her inflammatory comments about the George Floyd murder trial.

Not only are Republicans, such as House Minority Leader Kevin McCarthy (R-Calif.) working to censure Waters, but according to Fox News reporter Chad Pergram, Democrats found Waters’ comments “revolting” and there is “disgust” among the House Democratic caucus, which “metastasized” after Cahill publicly rebuked Waters.

“Congressional Democrats have a major problem with House Financial Services Committee Chairwoman Maxine Waters (D-CA) and her ‘confrontational’ comments in Minnesota over the weekend,” Pergram reported.

“Fox is told that rank-and-file Democrats found what Waters said revolting. But that disgust among Democrats further metastasized after Hennepin, MN County Judge Peter Cahill criticized Waters from the bench, describing her remarks as ‘disrespectful to the rule of law.’

Pergram reported that “Fox is told that a lot of Democrats are angry at Waters, are concerned about the optics of potential violence being linked back to her and Democrats generally. Don’t forget how many moderate Democrats were beside themselves following the midterms and the “defund the police” movement. With such a narrow majority, Democrats can only lose two votes on their side.”

The report also went on to say that some Democrats support a “reasonably worded” censure to rebuke Waters.

“One knowledgeable Democrat told Fox that some Democratic members are so angry at Waters now that they would relish the opportunity to censure her,” Pergram reported.

Republican Rep. Lisa McClain of Michigan said Monday that if Waters was a Republican, Democrats would demand punishment, according to The Western Journal.

“Once again, this weekend we saw a member of the majority openly call for more confrontation in a Minneapolis suburb. That very night, there was a drive-by shooting in that community where police and national guardsmen were targeted. If this were reversed, if this was said by a Republican, you know that the majority in this chamber would move to strip that representative of their committees and possibly to expel them from Congress,” she said, according to The Hill.

“The words ‘get more confrontational’ — what do those words mean? Are those not the words of someone — that someone would use if they wanted to incite more violence or insurrection?” McClain said.

However, Pelosi pushed back, saying “That woman on the floor should be apologizing for what she said. She was attributing some murder — some incident that happened after that to Maxine’s statement,” Pelosi added.

“No, Maxine talked about confrontation in the manner of the Civil Rights movement. I myself think we should take our lead from the George Floyd family: They’ve handled this with great dignity. … No, I don’t think she should apologize.”

McCarthy responded to Waters on Monday saying she went too far with her “dangerous comments.”

“We’ve heard this type of violent rhetoric from Waters before, and the United States Congress must clearly and without reservation reprimand this behavior before more people get hurt,” he said.

Additionally, the judge in Chauvin’s case also called out the Democrat House member saying that she has handed the defense an excellent argument for appeal.

“I will give you that Congresswoman Waters may have given you something on appeal that may result in this whole trial being overturned,” Cahill said after denying the defense’s motion for a mistrial over Waters’ remarks.

“This goes back to what I’ve been saying from the beginning. I wish elected officials would stop talking about this case especially in a manner that is disrespectful to the rule of law, and to the judicial branch and our function,” the judge added. “I think if they want to give their opinions they should do so in a respectful and in a manner that is consistent with their oath to the Constitution to respect a coequal branch of government.”

“Their failure to do so is abhorrent!” he said.