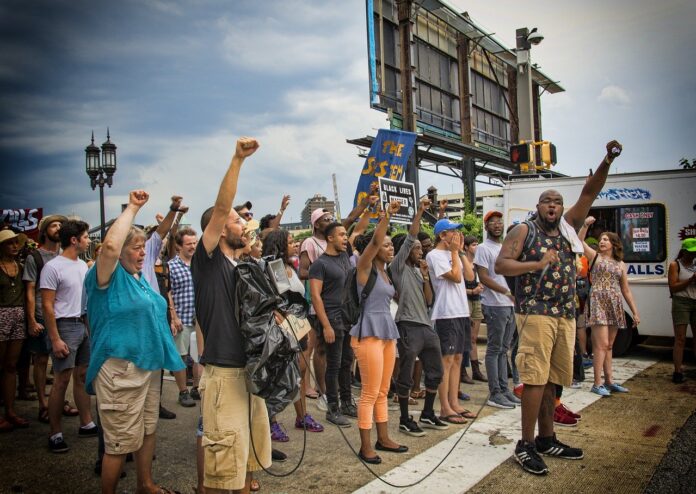 As you well know, Black Lives Matter or BLM has practically made history in the past year regarding how many protests, riots, and general chaos they can drudge up in the name of racial tension. Ever since George Floyd died nearly a year ago while under police custody, BLM, along with most of the political left, has made it their mission to draw attention to police brutality and any racial injustice that may be going on.

It’s a noble cause to be sure. But one that is increasingly exaggerated upon.

Of course, there are a few “bad apples,” as they are called, in any industry or line of work. But as BLM seems intent to prove, they believe that ALL police officers and the entire law enforcement system are inherently evil and racist.

They try to prove this by calling attention to any death involving police anymore. Well, that’s not entirely true. As it turns out, they really only care about Black deaths – you know, such as George Floyd, Breonna Taylor, and now Daunte Wright.

But they are apparently so eager to call the police out for racism that they don’t always take the time to get all the details first.

Take a recent police-involved shooting in Burnsville, Minnesota, for example.

The incident occurred on Sunday, in which it was reported that a man was shot and killed by police after opening fire on them.

Naturally, local BLM members and other activists, ready to stand for their cause, were quick to rally outside Minnesota Governor Tim Walz’s mansion to protest and take a knee for the lost soul.

As KMSP-TV reporter Mitti Hicks tweeted, “Protesters kneel after hearing there was an officer-involved shooting in Burnsville moments ago. This information HAS NOT been confirmed, but this group says they’re headed there.”

As you can see, many protesters are sporting BLM attire and memorabilia.

Protestors kneel after hearing there was an officer-involved shooting in Burnsville moments ago. This information HAS NOT been confirmed but this group says they’re heading there. pic.twitter.com/MHdQQmytnY

However, only an hour later, after many protesters had already left to make their way to their new site of attention, the whole thing was called off, and Hicks reported that they were headed back to the Brooklyn Center Police Department instead.

The group claimed that before they start protesting at another site, they needed to verify some information and get all the details. After all, it’d be a shame if the shooting didn’t precisely follow their race-baiting and division-stoking narrative.

As it turns out, the poor man these individuals took a knee for and were prepared to protest in earnest was white…

Traffic cameras from the Burnsville area show a vehicle chase by police, in which a man, and a white man at that, suddenly jumped from the car and pointed a gun at police, getting off a few rounds before being shot at in return by responding police officers.

The news release notes that the man was “believed to be a white male in his 20s.” He was later taken to a local hospital, where he was pronounced dead.

This proves two significant flaws with BLM’s hasty actions to kneel and protest this man’s name.

The first is that this guy was clearly a criminal. He visibly wielded a gun at police and shot at them. And yet, BLM didn’t have a problem with that. They were so intent on getting to point the finger at the police yet again that they didn’t care one wit whether the killing was actually justified or not.

And secondly, that they clearly only care about black victims. As soon as they learned this guy was not, in fact, black, they dropped all interest in him and his inference with law enforcement.

Of course, there is also the fact that their whole mission is to prove that all cops are bad and out for black lives, and this goes against both.

Not only did these officers fire at a white man, but in doing so, they likely saved and protected others.

And this group of BLM operatives just pointed it out for the whole world to see by protesting and taking a knee for this guy. Big oops…