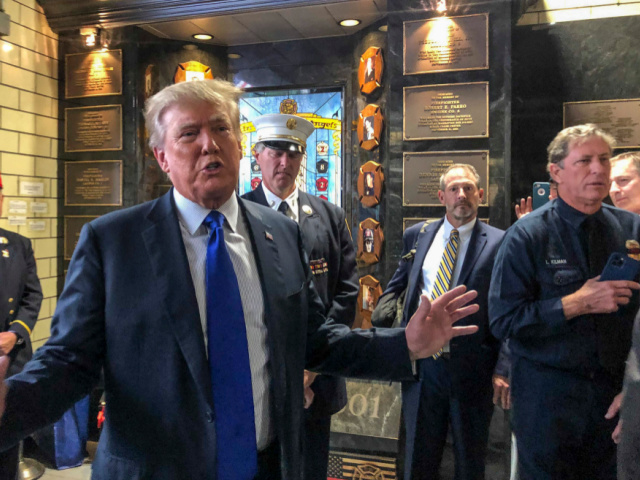 The former president spoke about the importance of law and order and honoring the sacrifices made by police departments throughout the city.

“I grew up with you, and you are New York’s finest. You are incredible people,” he said.

Trump also took selfies and photos with police officers inside the precinct and outside the building.

The visit was captured by news cameras and published online.

Inside the precinct, Trump answered questions from some of the police officers.

Former President Donald Trump, second from right, commemorated the 20th anniversary of the Sept. 11 attacks by visiting the NYPD’s 17th police precinct in New York, where he criticized President Biden over the pullout from Afghanistan, Saturday Sept. 11, 2021. (AP Photo/Jill Colvin)

“You’ve heard so many words, all you hear is words and they become meaningless after a while when you hear some of these politicians talking,” he said.

When asked if he would run for president again, Trump replied that he could not say because of campaign finance rules.

“I know what I’m going to do, but we’re not supposed to be talking about it yet,” he said, complaining about the “ridiculous” laws.

“I think you’re going to be very happy,” he added.

He was also asked, if he didn’t run for president, whether he would run for mayor of New York.

“Well, that’s an interesting question. I would love that,” he said.

Trump repeated his support for law enforcement, noting their job was made more difficult by politicians in the city unwilling to tackle crime.

“If they let you do your job you could take care of it very quickly,” he said.

He noted that the police officers should not demonstrate support for what he was saying.

“Don’t nod because if you do nod you’d be in trouble,” he said as they laughed.

As he visited with firefighters, he recalled the fall of the World Trade Center on 9/11 and all of the brave first responders who lost their lives.

“I know all about that building. I was down there right after and it was a tragedy,” he said.

He continued, “To think that knowing the one building came down and you still had people going from fire, people going up the other building, I assume just knowing what was going to happen, the bravest people, and I just want to thank you, you’re incredible.”