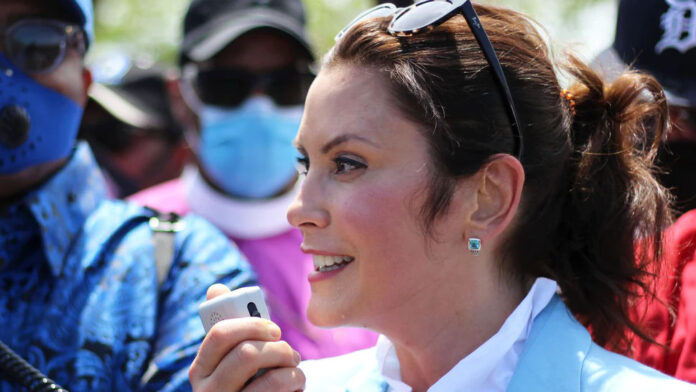 A bold-faced liar will always be caught. And that is what has finally happened with witchy Whitmer. She was caught making false statements regarding he travels and movements in recent days.

Whitmer has forcefully locked people down in the state of Michigan because of her power-hungry intentions. She tells people they cannot travel or even work because there is a pandemic sweeping their towns. She gets on the television and tells people that she is obeying her laws and staying put. But as soon as the camera is shut off, she goes about her real life like nothing is wrong.

Whitmer cries about Florida, tells people she stays in the state of Michigan, and then secretly travels to the very place that she is telling people to fear. The old belief that she is somehow above the law and does not have to answer to the law.

Whitmer was caught in a lie when she was doing a podcast with Kyle Melinn, who is with MIRS News. During the interview, Whitmer claimed to have never traveled outside of the state. This one statement would be a lie.

Whitmer wanted to set herself up as a saint that obeyed like everyone else, but her sins would find her out. She responded by saying loud and clear, “Yeah, like most people on my team, we’ve been working 14 months without much of a break. Um, my, my daughter had spring break. Um, I didn’t do much of anything, you saw me, I was here in town the whole time, but, um, you know, it’s, the weather’s getting nicer, so I’m moving some of my zoom calls outside, that’s the most exciting, ah, development.”

She lied to make it seem like she was working non-stop for the people of Michigan. She wanted to be a saint but would end up being a demon in disguise.

Melinn wanted to know where Whitmer would want to go on vacation if she could actually take one. And this is where Whitmer gets in deep trouble. She stated, “Oh gosh, I don’t know. I haven’t really thought about it. I, you know I, my last, my first big trip as governor, ah, and the last trip I’ve taken was to Israel.”

That lie would come out when she discovered that she jumped on a plane and traveled to Florida to visit her dad. She lied because her trip was secret, and she did not want to appear to be a bigot and a fraud after she had just accused Floridians of infecting her state with more COVID outbreaks.

She tried to weasel her way out of the corner by making mention that she wasn’t “partying in Miami.” Democrats love to downplay their sins and make it seem that it was an innocent mistake.

But Ted Goodman, who is the Communications Director of the Michigan Republican Party, noted that “The issue is not that Gov. Whitmer visited her father, it’s that she lied about it and continues to hide key facts. It’s also hypocritical as Michiganders were denied the same opportunity through her rules that locked people from visiting their loved ones in hospitals and nursing homes.”

She deliberately defied her own orders and rubbed them in the faces of her people. Whitmer is a bold-faced liar, and she will be held accountable for her lies no matter how hard she tries to make them disappear.