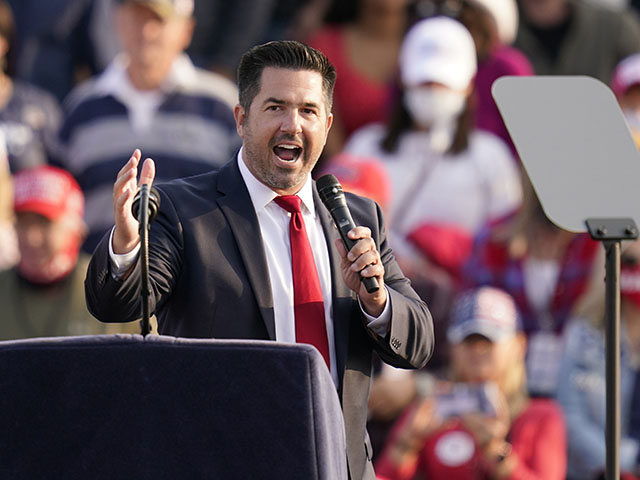 Parnell, who served in heavy combat in Afghanistan for more than a year, heatedly explained what he perceived were Biden’s wrongdoings throughout the U.S. military’s withdrawal process, providing his remarks to Breitbart News on the 20th anniversary of 9/11.

“It’s hard to wrap your mind around, or for me to wrap my mind around, just how bad Joe Biden got this withdrawal,” Parnell said. “I have been vocal about the importance of withdrawing from Afghanistan in a responsible way. You know, we’ve been there for 20 years. It was time to do a battle handover with the Afghan National Army, but not the way Joe Biden did it.”

Parnell continued, “Just think about this, that someone in the Pentagon or the White House thought it was a good idea to pull our military out of the country before we got all of our American citizens, fully vetted allies, who fought and bled, out of that country. That to me is just beyond the pale. … You don’t have to be Gen. Patton to know that it might be a bad idea to pull your military out of that country before you get your people out of there in one of the most hostile, rugged places on the earth.”

Taliban forces in mid-August toppled Afghanistan’s government, leading the Biden administration to hastily pursue an evacuation mission out of the country.

A U.S. Air Force aircraft takes off from the airport in Kabul on August 30, 2021. (AAMIR QURESHI/ Getty Images)

The botched effort left many American citizens and foreign allies behind and did not end without a deadly suicide bombing happening mere days before the evacuation’s conclusion. Parnell assessed that abandoning the largest base the U.S. had occupied in Afghanistan, Bagram Airfield, in July was one of the president’s early missteps.

“[From] the decision to relinquish, or abandon, Bagram Air Base to allowing the Taliban to secure our people’s exfil and march to the airport, which is insane because the Taliban’s a terrorist group … no doubt about it that that suicide bomber was let through a Taliban checkpoint,” Parnell said.

The Army veteran then pointed to a U.S. drone strike conducted in Kabul on August 29, which the Pentagon said killed a suicide car bomber suspect. Investigative reporting by the New York Times, however, suggested the drone strike may have been a mistake that killed ten innocent family members, including seven children.

U.S. President Joe Biden gestures to Secretary of State Antony Blinken as he gives remarks on the U.S. military’s ongoing evacuation efforts in Afghanistan from the East Room of the White House on August 20, 2021, in Washington, DC. (Photo by Anna Moneymaker/Getty Images)

“Almost every single day, the situation got worse and worse, culminating with Joe Biden authorizing a drone strike that killed a U.S. aid worker and an entire Afghan family, and then went out to the podium and bragged about it,” Parnell said. “It was clear that it wasn’t an ISIS terrorist because there were no details about the strike. Nobody released anybody’s names. … The fact that this is not a greater national scandal to me is just unbelievable.”

Parnell also noted that Biden’s July 23 phone call with Afghanistan President Ashraf Ghani, a partial transcript of which was published by Reuters, demonstrated Biden’s intent to “convince the president of Afghanistan to lie about the Taliban, their strength and the speed of their advance. The lie of course was egregious but the quid pro quo after was also egregious.”

Because, in part, American citizens and foreign allies from the 20-year war have been forced to exit Afghanistan by way of Taliban-controlled borders, the Biden administration also reportedly has been and continues to engage in negotiations with the new Taliban leadership, which includes now-Interior Minister Sirajuddin Haqqani.

The FBI designates Haqqani as a global terrorist and is offering an up to $10 million reward for any information leading to his arrest.

Parnell, who is running as a Republican for U.S. Senate in Pennsylvania next year, asserted he would vote to convict a hypothetically impeached Biden over “aiding and abetting terrorist groups.”

“If he is impeached in the House, you can bet that as the next United States senator from Pennsylvania, I would vote to convict in the Senate because Joe Biden is aiding and abetting terrorist groups, and he’s doing it in plain sight,” Parnell said. “He’s negotiating with the Taliban. He’s promising them aid, and the Haqqani network is part of the Taliban government. … That is absolutely an impeachment-worthy offense.”