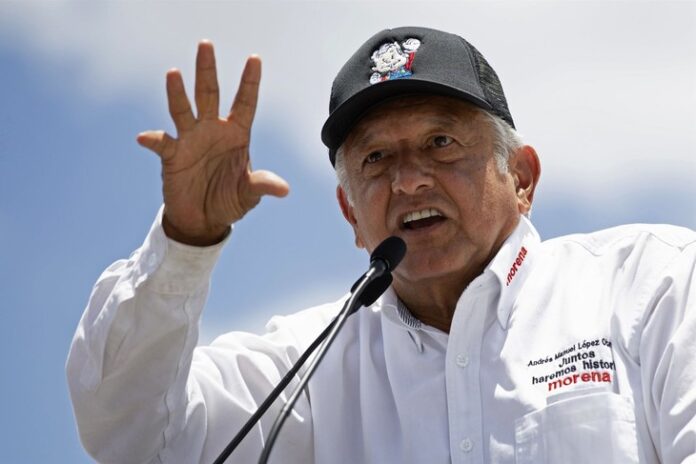 Mexican President Andres Manuel Lopez Obrador has proposed an insane idea and you already know how this one is going to go. Since the idea is absolutely bonkers, we are more than sure that Biden and Harris will be all for it. President AMLO wants to receive funding for his flagship environmental project from the Biden administration. He’s also working tirelessly to prevent climate change.

The idea is a simple one on paper. Biden provides the funding for his program, President AMLO offers incentives to those who are willing to work and an easier path to citizenship is created. What AMLO truly wants is an expansion of the Sowing Life (Sembrando Vida) program. This social entitlement program offers a monthly payment to any landowners who are willing to offer up an easy exchange.

The government is planting fruit trees or timber on their land and offering a payment in exchange. If successful, the program can create more long term work for those who reside in rural areas of Mexico. The $3.4 billion tree planting plan will meet goals that are related to climate change, in addition to combating poverty.

Of course, there is a catch here that has to be discussed. Landowners are cutting serious corners to receive the money. Jungles are being cut down, so that the wood can be used to build their homes. Bloomberg News has more on this problem. It is safe to say that President AMLO did not consider this:

“In many cases people said, ‘Well, I have my hectare of jungle but the program is coming so I’ll cut down the jungle, use the trees for my house or to sell the wood or whatever, and when the program comes I’ll sow seeds again,’” said Sergio Lopez Mendoza, an ecology and conservation professor at the University of Science and Arts of Chiapas, Mexico’s southernmost state.”

Sowing Life is a program that is meant to assist with reforestation but the opposite is happening. Under Mexico’s previous administration, landowners were paid to take care of the jungle and the ecosystem was supposed to be left untouched. Once President AMLO was given the chance to take office, all of this changed. Farmers are now being paid merely to plant trees, there is no provision about maintaining the current forestation.

Bloomberg has explored the scope of the losses and they are not pretty: “The program is currently paying around 420,000 farmers 4,500 pesos (about $213) a month to plant trees, according to the government. The goal is to reforest a little over one million hectares of degraded land across Mexico and grow more than one billion plants by the end of 2021. The government says it’s on track to meet that target.

That success may have come at a price, according to the World Resources Institute, an environmental non-profit that has worked with the Mexican government to monitor the results of Sowing Life. The Washington-based WRI estimates that the program may have caused the loss of nearly 73,000 hectares of forest coverage in 2019, its first full year, according to a study based on satellite images and shared with Bloomberg News.

That’s an area almost the size of New York City. It’s also nearly half the average annual amount of forest coverage lost due to land-use change and illegal logging in the same region, according to WRI calculations.”

If we had to guess, Biden and Harris will support the program as long as it is being presented to them as a climate change measure. In the meantime, President AMLO is playing them both for fools. American money for a Mexican social program? This is awesome for them and terrible for us.

American money cannot be spent on Mexican farmers who are only looking to game the system. This should be obvious to everyone but Biden and Harris cannot see the forest for the trees (see what we did there)? Bad ideas like these should be shooed away as soon as possible.