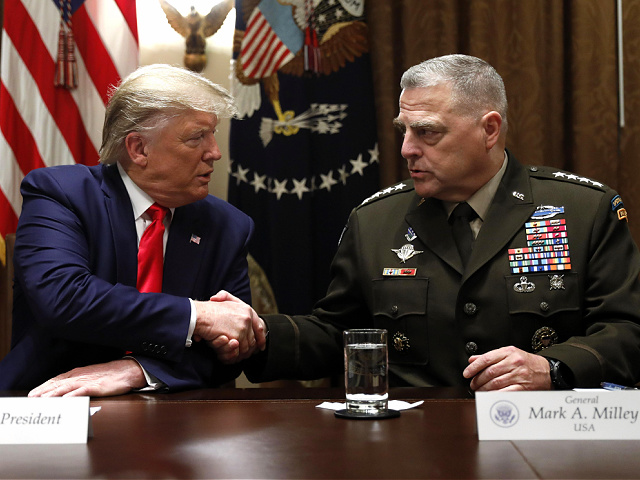 I don’t care what you think of President Trump, the Chairman of the JCOS working to subvert the military chain of command and collude with China is exactly what we do not accept from military leaders in our country. He should be court martialed if true.

Couple that with his inept handling of the withdrawal from Afghanistan, and it is clear General Milley is no longer fit to serve as Chairman of the Joint Chiefs of Staff and should be removed immediately.

Earlier in the day, Sen. Marco Rubio (R-FL) called for President Joe Biden to fire Milley in a letter charging that he undermined the former Commander in Chief of the United States Armed Forces by planning to commit treason. Rubio wrote:

I write with grave concern regarding recent reporting that General Mark Milley, Chairman of the Joint Chiefs of Staff, worked to actively undermine the sitting Commander in Chief of the United States Armed Forces and contemplated a treasonous leak of classified information to the Chinese Communist Party in advance of a potential armed conflict with the People’s Republic of China (PRC). These actions by General Milley demonstrate a clear lack of sound judgement, and I urge you to dismiss him immediately.

According to the upcoming book Peril by Bob Woodward and Robert Costa, Milley worried then-President Trump would “go rogue” and orchestrated two back-channel phone calls with China’s top general promising to inform him if an attack on the Communist country were to commence.

“You and I have known each other for now five years. If we’re going to attack, I’m going to call you ahead of time. It’s not going to be a surprise,” Milley reportedly told his Chinese counterpart.

U.S. President Donald Trump speaks as Joint Chiefs of Staff Chairman, Army Gen. Mark Milley looks on after getting a briefing from senior military leaders in the Cabinet Room at the White House on October 7, 2019, in Washington, DC. Trump spoke about the pull-out of U.S troops in northeastern Syria and the impeachment inquiry in the House of Representatives. (Photo by Mark Wilson/Getty Images)

In his letter, Rubio stressed that Milley interfered with America’s civilian-controlled military, which could possibly “lead to war”:

I do not need to tell of you the dangers posed by senior military officers leaking classified information on U.S. military operations, but I will underscore that such subversion undermines the President’s ability to negotiate and leverage one of this nation’s instruments of national power in his interactions with foreign nations.

Even more egregiously, reports indicate that General Milley interfered with the procedures by which the civilian commander-in-chief can order a nuclear strike. He purportedly instructed officials not to take orders without his involvement and forced them to take an oath to that effect. A senior military officer interfering with that civilian-controlled process is simply unacceptable at best, and at worst, would cause ambiguity which could lead to war.

General Milley has attempted to rationalize his reckless behavior by arguing that what he perceived as the military’s judgement was more stable than its civilian commander. It is a dangerous precedent that could be asserted at any point in the future by General Milley or others. It threatens to tear apart our nation’s longstanding principle of civilian control of the military.

@POTUS: If this is verified, you need to immediately dismiss General Milley.

We must preserve civilian control of the Armed Forces, through the president, as our Constitution requires. Any official who subverts this system should not be in office. Anyone concerned about an unfit president can seek a constitutional remedy; anything else betrays their oath

We must preserve civilian control of the Armed Forces, through the president, as our Constitution requires. Any official who subverts this system should not be in office. Anyone concerned about an unfit president can seek a constitutional remedy; anything else betrays their oath.