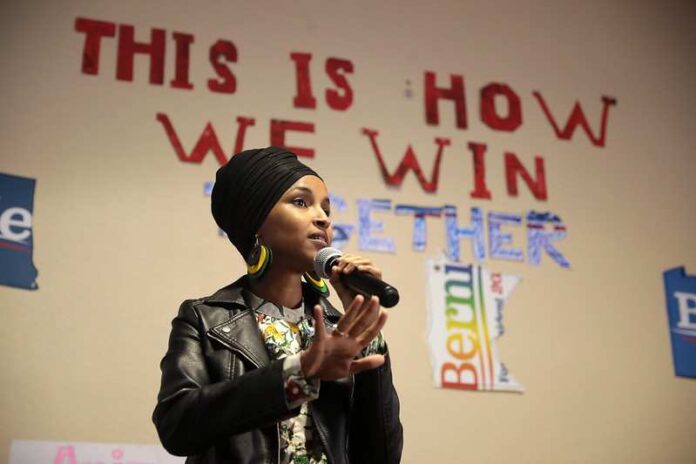 Ilhan Omar has no concept of what is acceptable with social behavior. For her to attend Daunte Wright’s funeral and that moment to stage a political activism speech is disrespectful and dishonoring to the deceased. Funerals are not a forum to push a political agenda or some personal vendetta. They are a time for the family to say their goodbyes and celebrate the life of the person.

But along comes Omar with her eulogy in hand, ready to give a speech on what everyone expected to be honoring to Wright, but instead, it turned into a police officer bashing moment.

She took the time to purposefully talk about herself with the intent of making herself look grand in front of everyone. The selfish socialist even ranted and raved over the police with how they had to stop a killer from stabbing other people in a whole confrontation.

Omar saw this moment to present herself as a rising star in stupidity. She came out and stated, “Thank you, Reverend Al Sharpton, for being here, and for that beautiful eulogy. Most of us in this room, including myself, look at you as a guardian, and are blessed to be in your presence.” She offers her praise to Sharpton that is generally seen as some form of god-like liberal.

She could not help but smother the man in lavish words of praise as if she was best to have him near her. Her words were cultic at best as she worshiped the man as a saint.

Omar’s humanism comes out very clear in her speech. She goes to praise people that she sees as her guardian angels. She lavishly stated, “And may Daunte Wright serve as a guardian for all of us. But as a member of the Congressional Black Caucus — as one of the youngest and newest members of the Congressional Black Caucus — I also have guardians: Congresswoman Sheila Jackson Lee and our chairwoman, Joyce Beatty, serve as guardians for me and many of my colleagues.”

At this moment, she turns the speech to be about herself and the glory she has being the baby on the block. Basking in her youth, she professes to be wise and is seen as the court’s jester.

Pushing out her fake tears, she transitions into making a political statement about the Ohio incident that the liberals were able to drum up as another way of attacking the police. The way she makes each moment seem like a never-ending tragedy does nothing for the people sitting at the funeral. Her speech should have been about Wright, but it was about her.

Wright was a thug with warrants for his arrest. Omar makes him out to be a saint, but he was a terror to many people. He was wanted for weapons charges. When the cops tried to arrest him, he resisted and tried to jump in his car. The police are not going to let that kind of person run and risk hurting others. They have a job to do, and Wright could have obeyed, and he would still be alive today.

The Ohio shooting has seen Kim Potter, the officer in question, charged with second-degree manslaughter. One reported noted that “The criminal complaint against Potter states that she pulled her Glock 9mm handgun with her right hand, and proceeded to point it at Wright and say she would tase him, according to the Washington County Attorney’s Office. Within seconds, Potter said “taser” three times and fired a single round from her gun into Wright, who said, ‘ah, he shot me.’ After firing the gun once, Potter proclaimed, ‘Sh*t, I just shot him.’”

The girl who was shot tried to murder another person with a knife. Potter was doing her job to serve and protect those in the community. And for Omar and the rest of the fascist liberals who are making Potter out to be the bad cop, have their polls reversed.

The liberals have never supported law enforcement. Republicans are the only group of people that care for the innocent. Democrats care for the criminals and view the victims as the aggressors. Something that Omar demonstrates with her hate speech.