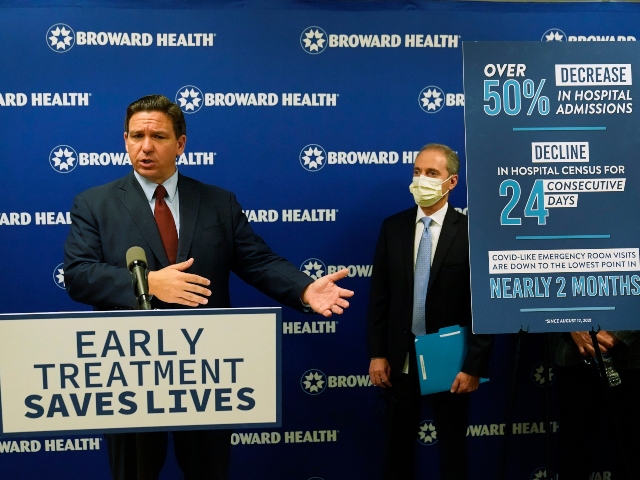 “I had a call yesterday with GlaxoSmithKline executives about their monoclonal antibody [product] sutrovimab,” said the governor, adding that sutrovimab showed great promise during clinical trials. DeSantis added:

The clinical data on that was even better than the clinical data on Regeneron – 85% reduction in hospitalizations. It is not approved for subcutaneous injections, so if we get it, and we use it at our sites, we have to expand the amount of IV treatments that are available, which we are going to be willing to do.

Since GlaxoSmithKline has no purchasing agreement with the federal government, DeSantis said that Florida could use their product sutrovimab to fill any shortages.

As Breitbart News reported on Thursday, the Biden administration “this week began to cut the distribution of monoclonal antibodies to red states, such as Florida and Alabama, contending those states, including Texas, Mississippi, Tennessee, Georgia, and Louisiana, are comprising too big a share of the supply in recent weeks — 70 percent.”

In response to criticism and backlash, the White House press secretary said the Biden administration’s policy was to make the distribution of monoclonal antibodies more “equitable.”

“Our supply is not unlimited and we believe it should be equitable across states, across the country,” Psaki said.