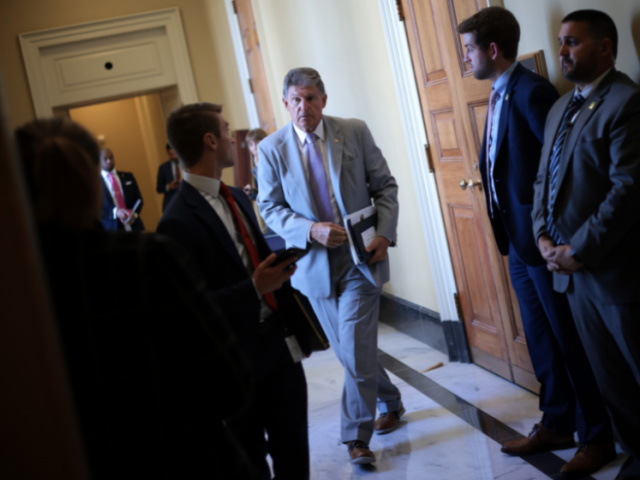 On Wednesday, sources told Axios that President Joe Biden reportedly hosted Manchin for a meeting at the White House where he failed to persuade the senator into agreeing with the $3.5 trillion bill.

Axios was told Biden explained to Manchin his opposition could imperil the $1.2 trillion bipartisan infrastructure bill that’s already passed the Senate. Biden’s analysis did little to persuade Manchin to raise his top line.

Manchin held his position and appears willing to let the bipartisan bill hang in the balance, given his entrenched opposition to many of the specific proposals in the $3.5 trillion spending package, Axios was told.

Though the two failed to reach an agreement, Manchin and the president reportedly parted on friendly terms and “agreed to keep talking.” Andrew Bates, deputy White House press secretary, told Axios that Manchin remains an “important partner” while refusing to “discuss the contents of private meetings.”

Should Manchin get his way and reduce the bill to $1.5 trillion, Democratic Party progressives who had hoped to use the reconciliation bill to push their agendas forward will have suffered a major setback.

Thursday night, the White House announced that President Biden had a productive phone call with House Speaker Nancy Pelosi (D-CA) and Senate Majority Leader Chuck Schumer (D-NY) “about the progress they are each achieving when it comes to advancing the Build Back Better agenda”:

The three discussed their ongoing coordination and outreach around making the case for building an economy that delivers for the middle class, and those seeking to get there, and not just those at the top by passing an historic tax cut for middle-class families and small businesses while cutting the costs of prescription drugs, care for children and older Americans, education, housing, and healthcare, while tackling the climate crisis.

Last week, after publicly urging Democrats to put a “pause” on President Joe Biden’s $3.5 trillion spending bill, Manchin reportedly said in private he will only support a $1 trillion price tag.

“Sen. Joe Manchin (D-W.V.) has privately warned the White House and congressional leaders that he has specific policy concerns with President Biden’s $3.5 trillion social spending dream — and he’ll support as little as $1 trillion of it,” reported Axios last Tuesday hours after President Biden expressed hope that he can reach a deal with the senator.

“At most, he’s open to supporting $1.5 trillion, sources familiar with the discussions say,” the report added.

In early September, Manchin threw a wrench into the Democratic Party’s plans with an op-ed in the Wall Street Journal arguing that the “overheating economy” just cannot endure another round of trillion-dollar spending without a clearer plan for the rocky future ahead.