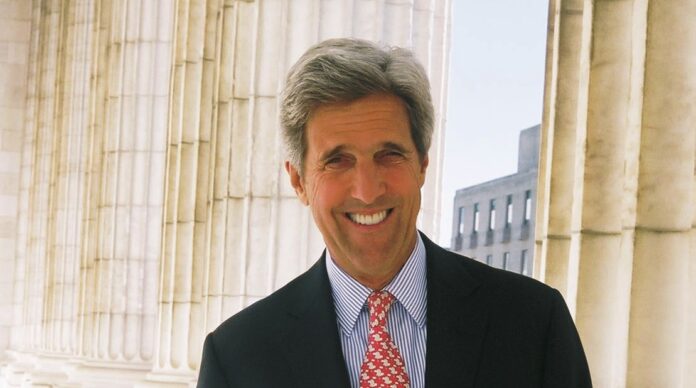 John Kerry lives in an imaginary world where he sits as the king, and the rest of the world are his subjects. Joe Biden played into his ego when he made him the Special Presidential Envoy for Climate. Kerry was able to get the old man to create a special position for him to fly around and act like he is doing something with his pointless life as a politician.

There is no doubt in anyone’s mind that Kerry hates the United States and everything that the nation stands for. And what makes his existence even more dangerous is that he hates Israel, which is the nation’s closest ally in the Middle East.

Joe Biden and the Democratic Party have abandoned Israel. Every time a Democrat steps into the Oval Office, Israel has to suffer neglect and ill-treatment. Biden clearly defined his support when he decided to work with Iran and restart its nuclear program.

The decision by Biden to ignore Israel led to try the nation taking action to stop a terrorist nation from gaining absolute power. Israel would on to hit critical targets that would put Iran’s program back into the dark ages.

But those hits were not in question for Kerry as he would end up ratting out Israel to the Iranians regarding hundreds of strategic attacks in Syria. Kerry’s big mouth has thrown Israel under the bus and has caused international trouble because he is the instigator of information leaking out that should have remained confidential.

Kerry is accused of handing over classified information to Iranian Foreign Minister Mohammad Javad Zarif. And like every Democrat caught in a lie, he has to come out and say, “I can tell you that this story and these allegations are unequivocally false. This never happened — either when I was Secretary of State or since.”

Jen Psaki was asked about the ordeal, and she claimed, along with State Department spokesperson Ned Price, that they do not talk about leaked material. Their refusal to talk about the matter is an attempt by them to cover up Kerry’s treason.

Kerry’s remarks are ambiguous at best. One report stated that Kerry never did say which part of the account he would claim is fake.

Senator Ted Cruz is fired up over Kerry’s leak. He noted that “If this tape is verified, it would signal catastrophic and disqualifying recklessness by Envoy Kerry to Foreign Minister Zarif that endangered the safety of Americans and our allies.”

Kerry is known to be a long-time Iranian supporter. Cruz proved stated

that “And it would be consistent with his long pattern of empowering Iran’s regime. Kerry poured hundreds of billions of dollars into the Ayatollah’s terrorist bank accounts, was a close confidant with Zarif during the Obama administration, and was caught repeatedly meeting with him during the Trump administration (notwithstanding the Logan Act) — and has never publicly accounted for what they discussed.”

Even Mike Pompeo, who is the former Secretary of State and he was a CIA Director, noted that Kerry loves Iran and cannot keep intelligence reports from the hands of the enemy.

The American people must know what kind of deal is being made with Iran before anything can move forward. The fact that Joe Biden and John Kerry both seem to favor an enemy of America and Israel leaves many questions unanswered.

Many people are demanding that John Kerry be removed from his position or he should resign. Elise Stefanik from New York calls him a criminal and said he needs to be kicked out of his position. And then there is the former U.N. Ambassador Nikki Haley who would rightly state that “he is a criminal act and John Kerry must be immediately investigated and PROSECUTED. President Biden must immediately remove John Kerry from any government or advisory position.”

Joe Biden, John Kerry, and the rest of the liberal traitors in Washington have turned their back on America and her allies. They have joined with the enemy and provide them with what they need to inflict hurt on the American people.